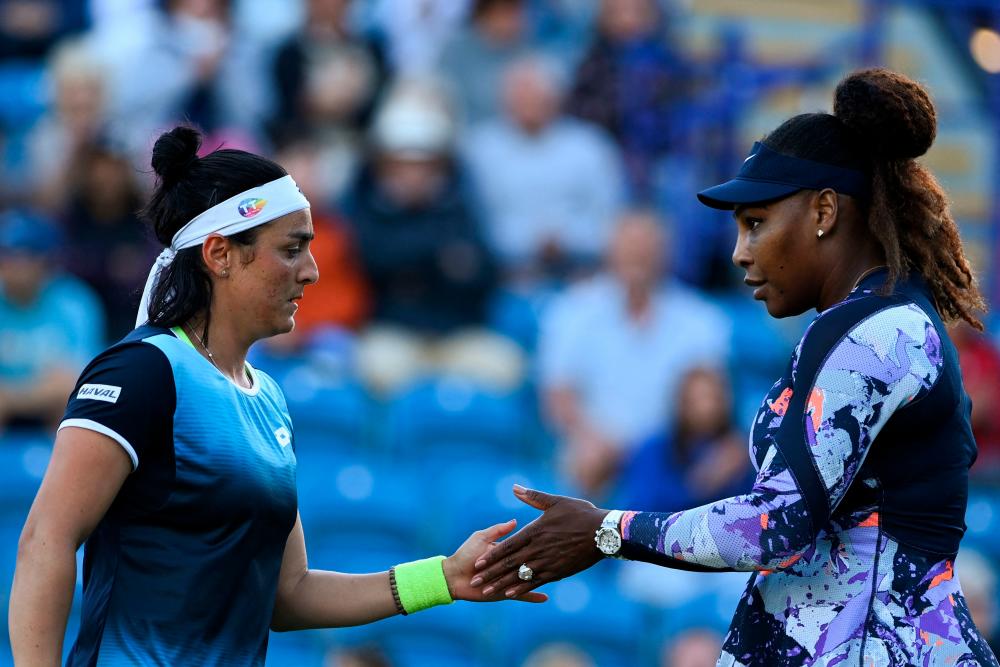 Serena Williams of the US (R) and Tunisia's Ons Jabeur react as they play against Japan's Shuko Aoyama and Tawain's Chan Hao-ching during their women's doubles quarter final tennis match on day four of the Eastbourne International tennis tournament in Eastbourne, southern England on June 22, 2022. AFPpix

EASTBOURNE: Serena Williams stepped up her comeback as the American star powered to a second successive victory in the Eastbourne doubles with her partner Ons Jabeur on Wednesday.

Williams and Tunisia’s Jabeur defeated Shuko Aoyama and Chan Hao-ching 6-2, 6-4 in the quarter-finals of the Wimbledon warm-up event at Devonshire Park.

Serena, a 23-time Grand Slam singles champion, is playing her first tournament since she made a tearful, injury-enforced exit from Wimbledon last year.

Williams, 40, had initially looked rusty on her first appearance for 12 months in Tuesday’s victory over Sara Sorribes Tormo and Marie Bouzkova.

But she grew into that match and was more like her old self in the second step on her comeback trail.

It took only two minutes for the American to send down an ace before several clinical volleys provided the first break.

The opening set was wrapped up in 25 minutes and another break inspired by Serena in the ninth game of the second set put them on the brink of victory.

One more ace for Williams’ tally helped get her and Jabeur over the line and they are now just two victories away from securing the title.

“I think we played together much better today, although I felt we played really well together yesterday. Ons really helped me out playing so good,“ Williams said.

Quizzed on how she celebrated yesterday, Serena she went for a dip in the nearby sea on the south-coast.

“I went to the beach and for a swim like everyone here in the cold water, no, no way! I didn’t do much. I just played with my baby (Olympia). She is so fun,“ she said.

Before Williams made the surprise announcement of her return last week, rumours of retirement had swirled around her for several months.

But with Wimbledon starting on June 27, Williams has finally resumed her career.

She has been given a wildcard to play in the singles at Wimbledon as she restarts her history bid.

Williams is one Grand Slam crown away from equalling Australian Margaret Court’s record of 24 singles titles at the majors.

The last of her 23 Grand Slam singles titles came at the Australian Open in 2017.

Since then she has lost four Grand Slam finals, including at Wimbledon in 2018 and 2019.

Williams won the seventh and most recent of her seven Wimbledon singles titles in 2016.

Serena, who became a mother in 2017, has plummeted to 1,204th in the WTA rankings due to her period out of action.

Kvitova, who won Wimbledon in 2011 and 2014, was in danger of a shock defeat against Boulter after the world number 127 took the first set of their last-16 clash.

Boulter had knocked out last year’s Wimbledon runner-up Karolina Pliskova in the previous round.

But former world number two Kvitova showed her class as she took the second set at a canter.

The Czech, who last reached a Grand Slam final in Australia in 2019, held her nerve in a tense decider to win in two hours and 23 minutes.

In the men’s singles, Cameron Norrie defeated Brandon Nakashima 6-4, 6-2 for his first win on grass this season. — AFP

5.‘I didn’t question the source of RM7 mln donated to YAB’, says Zahid