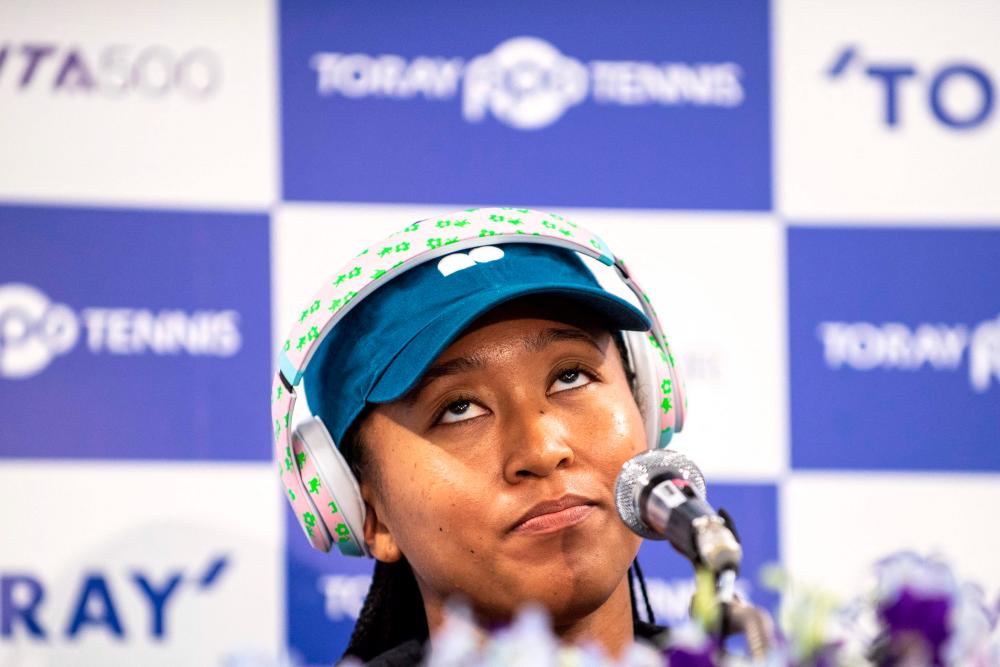 Naomi Osaka of Japan attends a press conference at the start of the Pan Pacific Open tennis tournament in Tokyo on September 19, 2022. AFPPIX

TOKYO: Struggling Naomi Osaka admitted Monday that she had gone through “more down than up” this year as she tries to break out of her slump at her home Pan Pacific Open this week.

The former world number one and four-time Grand Slam champion has plummeted to 48 in the women's tennis world rankings after a wretched run that has seen her crash out in the first round of her last three tournaments.

The Japanese 24-year-old has not won a title since last year's Australian Open and has been hampered this season with injury.

But Osaka is hoping to right the ship at the WTA event in Tokyo where she is defending champion, albeit from three years ago as the tournament returns for the first time since the coronavirus pandemic.

She will face stiff competition from a field that includes US Open semi-finalist Caroline Garcia of France, Wimbledon champion Elena Rybakina of Kazakhstan and Spain's world number four Paula Badosa.

“This year has been not the best year for me but I’ve learned a lot about myself,“ Osaka said, adding that she was “happy to be healthy”.

“Life is ups and downs, and this year was more down than up, but overall I’m pretty happy with where I am now.”

Osaka has been outside the top 10 all year and endured first-round defeats at both the French and US Opens.

She withdrew from Wimbledon with an Achilles injury, after originally considering skipping the tournament because ranking points would not be awarded.

Osaka admitted that her fall from the sport's summit had been difficult to handle.

“It was kind of hard at first, just because I feel like I should be somewhere where I’m obviously currently not,“ she said.

“I think for me it’s more about being at peace with myself. I know that I’m here for a reason.”

Osaka said she was looking forward to playing in front of Japanese fans again after taking part in last year’s Tokyo Olympics behind closed doors, but would have to “trust in my forehand more” to rebuild her confidence after her poor season.

She will begin her campaign against Australia's world number 55 Daria Saville in the first round.

Osaka paid tribute to tennis legend Serena Williams, who retired after the US Open, and said she had “gotten over trying to fill people’s shoes”.

“I don’t think you can ever do that because everyone is unique, and we’re all forging our own paths and we’re all on our own journeys,“ said Osaka.

“It’s really incredible all the stuff she’s done for this sport and beyond that. Just watching her as a businesswoman is really cool.” - AFP Senior cop convicted of money laundering gets another chance to appeal Underground pipe leak believed to have caused landslide in Ampang Senior cop convicted of money laundering gets another chance to appeal

Underground pipe leak believed to have caused landslide in Ampang 1.Senior cop convicted of money laundering gets another chance to appeal

3.Underground pipe leak believed to have caused landslide in Ampang