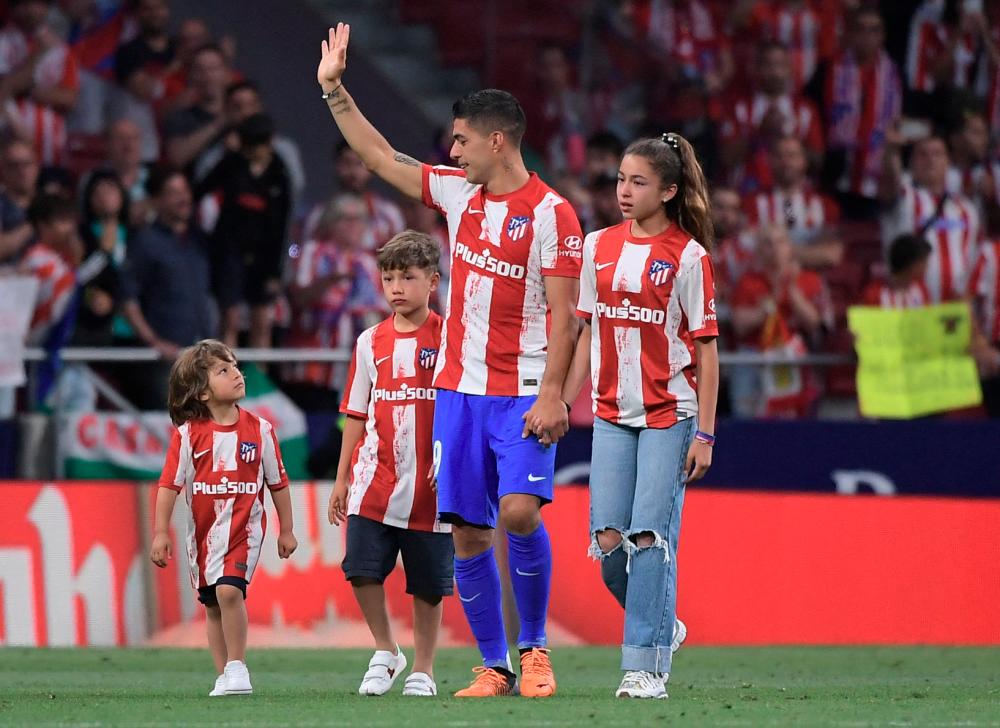 Luis Suarez acknowledges the crowd as he walks around the pitch with his children during his farewell as Atletico player at the end of the Spanish league football match between Atletico Madrid and Sevilla at the Wanda Metropolitano stadium in Madrid. AFPPIX

MADRID: Luis Suarez said he will always have Atletico Madrid in his heart after the striker waved goodbye to the club’s home fans following a 1-1 draw against Sevilla today.

The result meant Sevilla finally confirmed their place in La Liga’s top four as a late equaliser by Youssef En-Nesyri at the Wanda Metropoliano secured qualification for the Champions League.

“Thank you Lucho for making us champions,” read a giant banner unfurled in the crowd before kickoff while Suarez was visibly tearful as he paraded the pitch with his family after full-time.

The 35-year-old is set to leave Atletico when his two-year contract expires this summer.

After being forced out by cash-strapped Barcelona in 2020, Suarez exacted revenge by proving instrumental in Atletico’s monumental La Liga title triumph last season, when he scored 21 goals in 32 league appearances and finished as the team’s top scorer.

The Uruguayan has been useful but less emphatic this term, scoring 14 goals in 48 appearances and his own dip from last year’s high standards has been symptomatic of Atletico’s malaise more generally.

Suarez has often started on the bench since the turn of the year, with Joao Felix increasingly preferred by Atletico coach Diego Simeone.

“I thank all the Atletico fans, every one of them,” said Suarez afterwards.

“The love they gave me since I arrived has been amazing and I will not forget it. I tried to return it on the pitch, I gave myself 200% to a club that opened its doors to me.

“I will always carry the affection of this club with me after not being able to enjoy myself the previous season. I will take Atletico with me in my heart.”

Jose Gimenez’s first half header looked set to give Atletico victory and with Real Betis beating Granada, Sevilla’s fight for fourth would have gone down to a nail-biting final day.

Instead, En-Nesyri nodded in Oliver Torres’ cross with five minutes remaining to earn Sevilla the point they needed to guarantee their top-four spot, after a hugely disappointing few weeks that has seen their coach Julen Lopetegui come under pressure.

Instead, Lopetegui was tossed into the air by Sevilla’s celebrating players after the final whistle.

Atletico sit a point ahead of Sevilla and have a tough trip away at Real Sociedad to finish the season next weekend.

Sevilla will play at home to Athletic Bilbao.

Real Sociedad came from behind to defeat Villarreal 2-1 at La Ceramica in what was billed as the sudden-death match for Europa League qualification.

Villarreal had to win to keep their hopes of finishing sixth alive and took the lead after Francis Coquelin’s acrobatic effort just before halftime.

But La Real came storming back in the second half, Alexander Isak tapping in at the back post before Martin Zubimendi prodded in after Villarreal failed to clear.

It means Real Sociedad and Real Betis will play in the Europa League next season while Villarreal sit a point ahead of Athletic Bilbao and might need a result away at Barcelona on the last day to qualify for the Europa Conference League.

Barcelona sealed second place although a drab, goalless draw away at Getafe extends an underwhelming end to the campaign for the Catalans.

The result, though, suited both teams as a point guaranteed Getafe’s survival while Barca qualify for the Spanish Super Cup, which earns them around €8 million.

Cadiz are right in the middle of the relegation fight and left the Nuevo Mirandilla disappointed, despite a 1-1 draw at home to already-crowned champions Real Madrid.

Carlo Ancelotti continues to rotate his team ahead of the Champions League final against Liverpool on May 28 and Cadiz were the latest team to profit, with Karim Benzema, Thibaut Courtois and Luka Modric all left at home.

Real took the lead when Mariano Diaz steered in and while Cadiz equalised through Ruben Sobrino, they could have won it when Andrey Lunin brought down Alvaro Negredo and the referee pointed to the spot.

Lunin, though, made amends by saving Negredo’s spotkick.

Mallorca are level on points with Cadiz after they gave their survival hopes a major boost by beating Rayo Vallecano 2-1, Abdon Prats scoring an incredible 92nd-minute winner at Son Moix.

Granada, who are one point ahead of Mallorca and Cadiz, lost 2-0 away at Real Betis.

Alaves join Levante in being relegated after they lost to Levante 3-1. - AFP