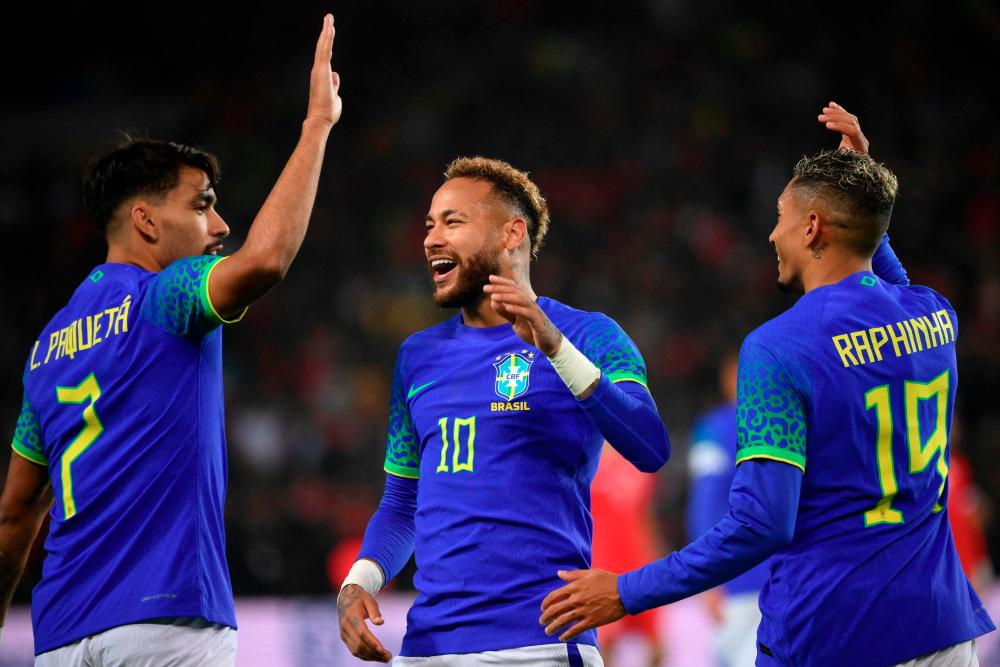 PARIS: Rampant Brazil destroyed 10-man Tunisia 5-1 in a friendly on Tuesday with Raphinha scoring twice and setting up another goal in their last game before the World Cup.

It was another dominant performance by the South American giants who beat Ghana 3-0 on Friday, giving their fans plenty of reasons to be excited by their young team heading into Qatar where they will bid for a record-extending sixth world title.

Raphinha opened the scoring in the 11th minute with a brilliant header from the edge of the area over goalkeeper Aymen Dahmen. However, Tunisia equalised seven minutes later with an opportunistic header by Montassar Talbi from a free-kick.

Brazil were back in front a minute later though when Raphinha found Richarlison ghosting behind the defence and the striker fired a low shot between the keeper's legs.

During the goal celebrations a banana was thrown from the stands towards the Brazil players, who have been vocal against racism after Vinicius Jr was racially abused by Atletico Madrid fans before their derby against Real Madrid this month.

Brazil extended their lead through a Neymar penalty in the 29th minute after Aissa Laidouni held Casemiro back.

Raphinha scored his second with a precise low shot from the edge of the area in the 40th after a lightning counter-attack.

With victory assured, Brazil eased off in the second half as manager Tite sent on several substitutes.

Flamengo forward Pedro, the biggest sensation in the Brazilian league this season, came on and netted the fifth with a superb first-time shot from the edge of the box in the 74th.

Brazil will open their World Cup campaign against Serbia on Nov. 24 and also face Switzerland and Cameroon in Group G. - Reuters