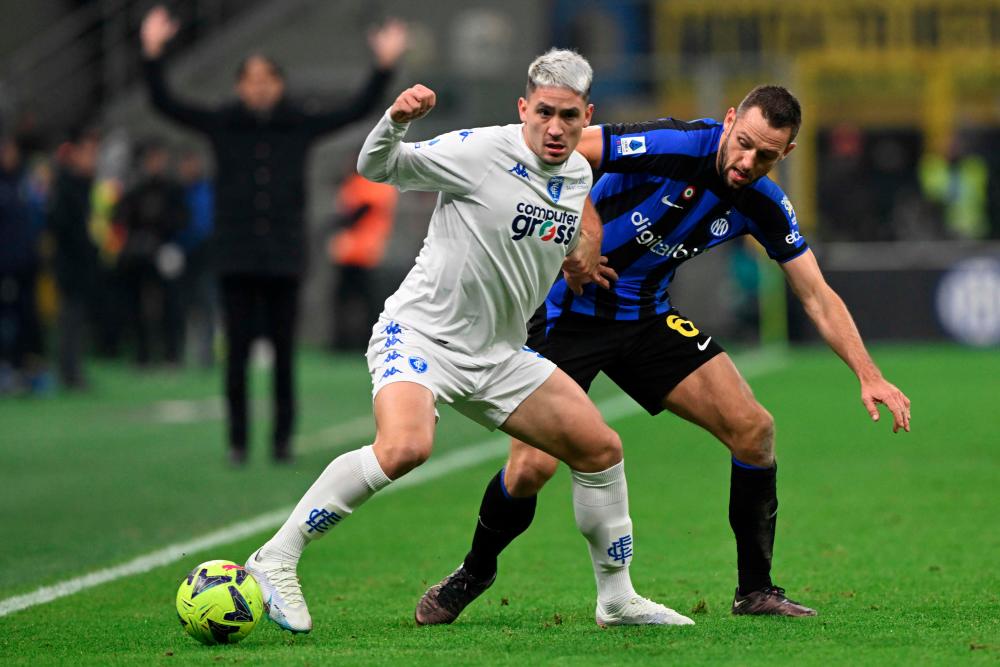 MILAN: Inter Milan missed the chance to go second in Serie A when they slipped to a 1-0 defeat at home to Empoli on Monday.

Inter, who had won their last nine league games against Empoli, began the day in third but their hopes of climbing above city rivals AC Milan into second were hampered five minutes before half-time when Milan Skriniar was dismissed for a second yellow card.

The Slovak defender, who has been linked with a move to Paris Saint-Germain, was booked for obstruction in the 25th minute before being shown the red card for a nasty tackle.

The only goal came after 66 minutes when Nedim Bajrami provided the assist for 19-year-old Tommaso Baldanzi to fire home off his left foot for his third goal of the season.

Inter battled hard to retrieve the game with Simone Inzaghi throwing both Edin Dzeko and Romelu Lukaku into the fray.

They came close on several occasions and had a header rebound off the bar but less than a week after lifting the Italian Super Cup in style with a 3-0 win over AC Milan, Inter may have kissed goodbye to the Scudetto.

Inter remain third, a point behind AC Milan who play at Lazio on Tuesday, and level on points with Roma.

Napoli are the runaway leaders, 12 points clear at the top.

In Monday's other game Bologna were held to a 1-1 draw by bottom side Cremonese.

The visitors took the lead through a David Okereke penalty five minutes after the break. But Cremonese were denied their first win of the season when Vlad Chiriches scored an own goal five minutes later.

On Sunday, Juventus played out a thrilling 3-3 draw with Atalanta in their first match since being slapped with a massive points deduction for illicit transfer activity.