This is for you, coach: Joe Ee (Updated) 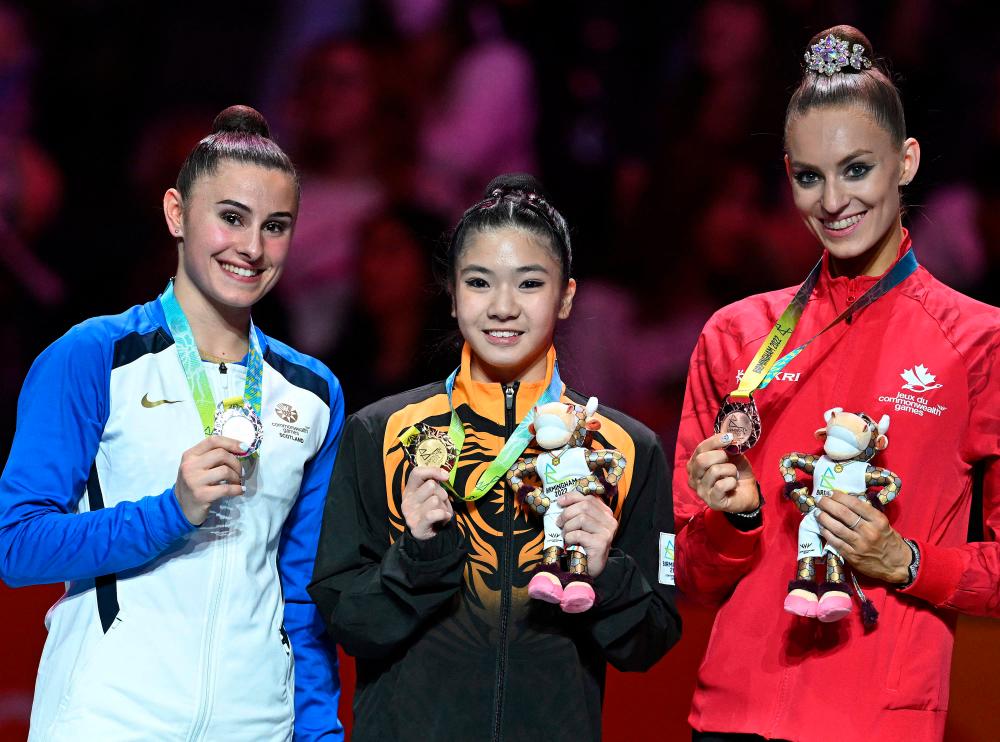 BIRMINGHAM: The newly-crowned ball and ribbon disciplines champion, Ng Joe Ee, has dedicated her two gold medals in the Birmingham 2022 Commonwealth Games to her Russian coaches.

Joe Ee, who created history as the first Malaysian gymnast to bring home two individual golds in the same Games, admitted she felt weird and difficult to compete here without her two coaches for the first time ever in any multi-sports event or tournaments.

After her Russian coaches were barred from entering the United Kingdom, debutant Joe Ee was relieved to follow online training with them, and that paid handsome dividends as she successfully rose to the occasion to help Malaysia achieve their six gold medal target here.

“The coaches keep reminding me all of my mistakes, advise me to try to minimise them, and go all out via online training.

“I am freaking happy right now, I did not expect to win gold at all but I believed all my hard work before the Games had finally paid off. This win is for my parents too as they were the ones who keep supporting me by sending me to training,” she told reporters when met after the final.

Previously, the media had reported that the two Russian gymnastics coaches for the Games may have run into a visa snag.

Youth and Sports Minister Datuk Seri Ahmad Faizal Azumu said both may be affected by entry restrictions imposed by the UK government on Russian citizens following the Russia-Ukraine conflict.

In the meantime, the 16-year-old athlete pointed out that the failure to help the national team to bring home medals in the team event and individual all-around earlier had fueled her to perform much better in her last opportunity on the penultimate day of rhythmic gymnastics.

“I have promised everyone to do better for today’s final after we failed to get medal in the first two events. I am glad that I finally managed to overcome nervousness playing in such a big crowd after two days,” she added.

Asked about her next mission, Joe Ee hoped that she could help the Malaysian team to reclaim team events gold in the upcoming Commonwealth Games in Victoria after they last won it in Kuala Lumpur 1998 as well as focusing on the Asian Games in Hangzhou, China, next year.

Joe Ee kicked off her actions today in staggering fashion as she puts on a delicate show in Arena Birmingham by scoring 29.700 points in ball discipline to finish ahead Canada’s Suzanna Shahbazian, who had to settle for silver with 29.050 points while Anna Sokolova of Cyprus took bronze with 28.800 points.

Buoyed by her first gold, Joe Ee then soared to another high point again to bag her second gold, this time via ribbon discipline with 27.800 points to edge Louise Christie of Scotland who took silver with 27.550 points while Carmel Kallemaa of Canada scored 27.500 points to secure bronze.

Meanwhile, another national gymnast, Izzah Azman, who earned a bronze in clubs discipline, was grateful that she was finally able to bring home her first individual medal after helping Malaysia to clinch silver in the team event in Gold Coast 2018.

“This medal is for my return as it is not easy to make a comeback after the surgery on my left knee before Movement Control Order (MCO).

“Winning a medal means a lot to me regardless of the colour, as it is still gold to me,” she said.-Bernama