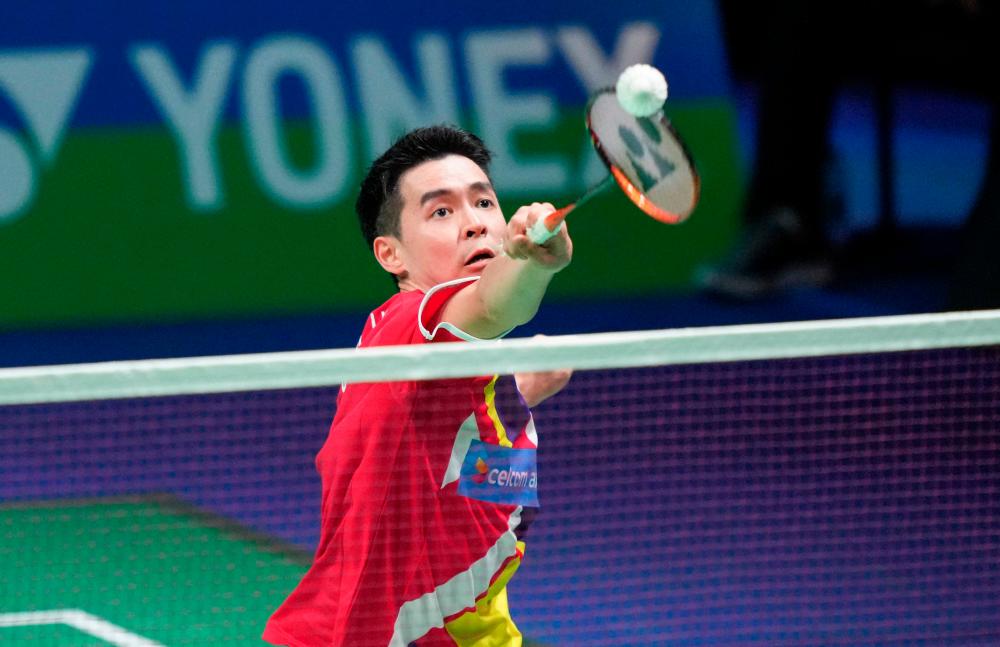 Malaysia’s Cheam June Wei plays a ball during a men’s single match of the Badminton Thomas Cup between Japan and Malaysia in Aarhus, Denmark, on October 14, 2021. AFPpix

AARHUS: Indonesia have denied Malaysia a place in the semi-finals of the Thomas Cup for the second straight edition after trouncing Lee Zii Jia and Co 3-0 in the quarter-finals at the Ceres Arena, here, today.

Indonesia, who have won the Thomas Cup a record 13 times, had knocked out five-time winners Malaysia 3-1 in the 2018 edition in Bangkok.

Malaysia were counting on world number eight and team captain Zii Jia to give them a winning start so as to inspire his teammates but, alas, he was found wanting against world number five Anthony Sinisuka Ginting in the first singles.

Malaysia then pinned their hopes on Tokyo Olympics bronze medallists Aaron Chia-Soh Wooi Yik to upset world number one Marcus Fernaldi Gideon-Kevin Sanjaya Sukamuljo for the third straight time in the first doubles, after eliminating the Indonesians in the Sudirman Cup quarter-finals and Olympic semi-finals.

But the world number eight Indonesians, known as the Minions, were in no mood to entertain such thoughts as they fought tooth and nail to gain sweet revenge, winning 21-17, 16-21, 21-15 after nearly an hour for their eighth win over the Malaysians in 10 meetings.

With Indonesia just one win away from clinching the winning point to confirm their semi-final spot, Malaysia’s 21-year-old Ng Tze Yong nearly tore the formbook to shreds with a gutsy performance against world number seven Jonatan Christie in the second singles.

World number 82 Tze Yong was fearless against his higher-ranked opponent and even stunned the Indonesian to win the first game 21-14.

But experience finally prevailed as Jonatan slowly but surely found his mojo to win the next two games 21-19, 21-16 after a 75-minute titanic battle to hand Indonesia the winning point and a place in the last four.

Indonesia, who are looking to end their almost two decades title drought after last lifting the prestigious trophy in 2002, will take on hosts Denmark in the last four tomorrow.

The Danes defeated India 3-1 in the quarter-finals.

Earlier, reigning champions China had no problems disposing of Thailand 3-0 to set up a semi-final clash against last year’s runners-up Japan, who edged South Korea 3-2 in another last-eight match.-Bernama

4.Hoteliers hope this is not the beginning of another setback