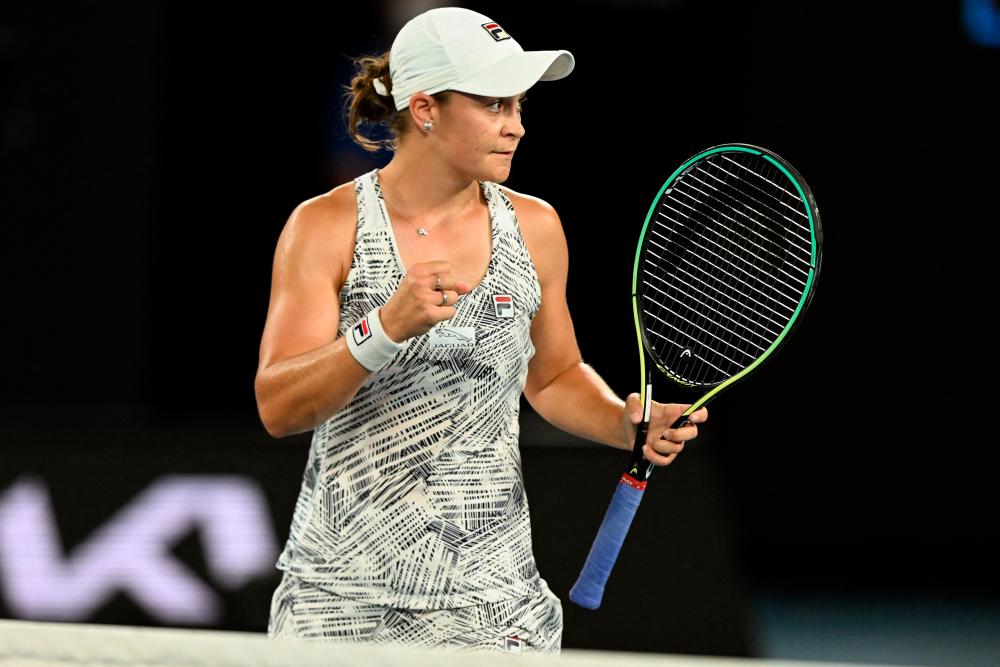 Australia’s Ashleigh Barty celebrates after beating Madison Keys of the US in their women’s singles semi-final match on day eleven of the Australian Open tennis tournament in Melbourne on January 27, 2022. AFPPIX

MELBOURNE: A ruthless Ashleigh Barty swept into her first Australian Open final on Thursday with the top seed outgunning a resurgent Madison Keys in a clinical, straight-sets demolition.

The world number one overwhelmed the 51st-ranked American 6-1, 6-3 in just 62 minutes to set up showdown against either Polish seventh seed Iga Swiatek or American 27th seed Danielle Collins.

Barty is the first Australian woman into the decider of her home Grand Slam since Wendy Turnbull in 1980 and is aiming to become the first winner since Chris O'Neil two years earlier.

“Honestly, it’s just incredible. I’m just happy I get to play my best tennis here,“ said Barty, who is assured of retaining her world number one ranking even if she loses the final.

“The ball was a little slower tonight, heavier off the strings. I just tried to run and adapt, make as many balls as I could and keep Maddie under the pump on her serve because she has the ability to really take it away from you quickly.”

Barty paid tribute to Keys, a former top-10 player who is on the rise again after difficult couple of years.

“It’s just so nice to see her back where she belongs,“ said Barty. “She’s an amazing human being.”

Barty has been unassailable in Melbourne, dropping her serve just once through six matches and is yet to drop a set.

And the top seed, who played cricket with her team on Wednesday to relax, was once more in full command of her game with an attacking forehand and lethal backhand slice.

Facing Barty on her home turf was an unenviable assignment for 26-year-old Keys, but she came into the game on a 10-match win streak, the best run of her career.

The Australian, though, immediately pressured her serve to create a break point that she converted with a cross-court winner to assert early control.

She consolidated with a serve to love as Keys struggled to get her racquet on the ball before the American gained confidence with a hold for 1-2.

The American was broken again in the fifth game, as her unforced error count mounted.

She finally won her first points on the Barty serve in the next game and gained a break point when Barty sent a looping forehand long. But the Australian saved it with an ace and stormed 5-1 in front.

Keys had beaten top 10 players Paula Badosa and Barbora Krejcikova back-to-back to make the last four and was more composed as her nerves settled in set two.

It went with serve to 2-2 before Keys worked a break point in the fifth game only to be denied by a Barty volley, before the Australian held.

Barty then stepped up a gear in the next game, earning three break points. Keys saved two before a passing shot put her 4-2 clear and there was no way back for the American. - AFP