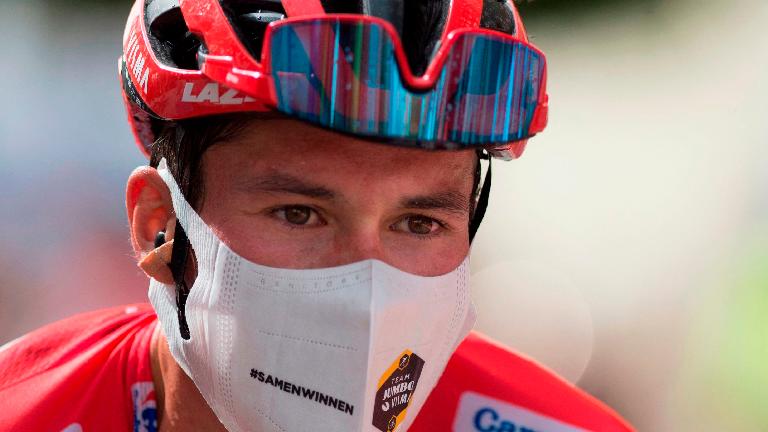 Primoz Roglic surrendered the leader’s red jersey after coming down in a minor crash. – AFPPIX

SPAIN: Australian Michael Storer won stage 10 of the Vuelta a Espana on Monday while champion Primoz Roglic surrendered the leader's red jersey to Odd Christian Eiking after coming down in a minor crash.

The hilly stage featured a category two climb of 612 metres above sea level and a downhill finish, putting victory beyond the reach of the sprinters and the general classification group and playing into the hands of breakaway specialists.

The peloton began to split after 50km and a 31-strong rider group peeled away to the front, while Storer launched an attack on the final four kilometres of the ascent on the Puerto de Almáchar to free himself from the chasing group.

He never looked back, descending comfortably to collect his second stage win of this Vuelta, finishing 22 seconds ahead of Mauri Vansevenant in second and Clement Champoussin in third.

Norwegian Eiking came fifth, also 22 seconds down on Storer, to become the new overall leader with a 58-second lead over second-placed Guillaume Martin and two minutes 17 seconds over Roglic, who was relegated to third overall.

Eiking and Martin are not expected to challenge Roglic and the other general classification hopefuls for much longer, however, particularly when the race returns to the mountains.

Roglic took a risk with some aggressive descending and paid the price on a corner when his back wheel came out from under him and he fell to the ground.

He quickly got back on the saddle, with ripped shorts and a bloody elbow and soon got back in touch with the general classification group containing Enric Mas, Miguel Angel Lopez and Jack Haig.

The group crossed the line 11 minutes 49 seconds down on Storer but put 37 seconds on Ineos Grenadiers rider Egan Bernal, leaving the Giro champion four minutes 46 seconds off the pace and two minutes 29 seconds behind Roglic. – Reuters