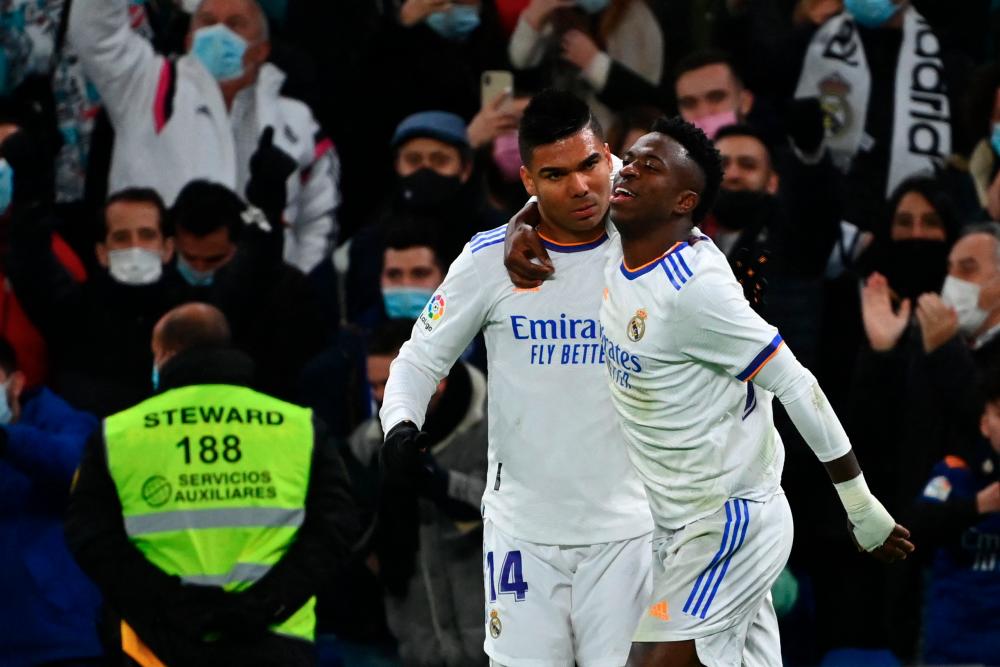 MADRID: Vinicius Junior scored a scintillating 87th-minute winner as Real Madrid came from behind to defeat Sevilla 2-1 and move four points clear at the top of La Liga on Sunday.

The 21-year-old Vinicius has been a revelation this season and proved the difference again at the Santiago Bernabeu, where he went off to a standing ovation after securing Madrid their sixth consecutive victory.

“He’s extraordinary,“ said Madrid coach Carlo Ancelotti. “He’s a player with something special in his feet.”

His goal, a stunning strike into the top corner after a surging run in off the left, ensured Sevilla took nothing from a game they had dominated for most of the first half.

Rafa Mir headed them in front early on but the game turned on an error from goalkeeper Bono, who gifted Karim Benzema his 19th goal of the season, the night before the 33-year-old hopes to win the Ballon d’Or.

Victory sends Madrid four points clear of Real Sociedad, who they face at Anoeta next weekend, while Sevilla stay fourth, now five points off the top.

“Maybe a draw would have been a fairer result but I don’t think we deserved to lose,“ said Ancelotti.

Real Sociedad lost ground after slipping to a surprise 1-0 defeat by Espanyol before Atletico Madrid bounced back from their Champions League loss to AC Milan in midweek with a thumping 4-1 win away at Cadiz.

Vinicius now has 11 goals in 24 appearances this term and while he was never a guaranteed starter under Zinedine Zidane, the Brazilian has exploded into life under Carlo Ancelotti.

This was the kind of decisive moment Madrid hoped they would be getting from Eden Hazard but with the Belgian still lacking both form and fitness, it seems they now have a ready-made replacement.

“I knew about his individual qualities, his dribbling, in one against ones, his speed, in all that he’s very strong,“ said Ancelotti. “But what surprises everyone now is that ability to score goals, which he didn’t have before.”

Madrid were sluggish and sloppy for most of the first half an hour, livened up only by Benzema’s goal that was gifted to him after Bono’s mistake.

Sevilla took the lead in the 12th minute when Mir was allowed acres of space to plant a header past Thibaut Courtois.

They should have been two ahead as David Alaba cleared off the line from Mir, who then forced an excellent save from Courtois after a lethargic touch from Toni Kroos gave him a second chance.

Lucas Ocampos struck the crossbar after Sevilla swarmed forward again but in the 32nd minute, they handed Madrid a lifeline as Eder Militao’s shot from distance squirmed through the hands of Bono, came back off the post and to the feet of the grateful Benzema.-AFP