Wijnaldum rescues PSG after Lens leave Messi in a daze 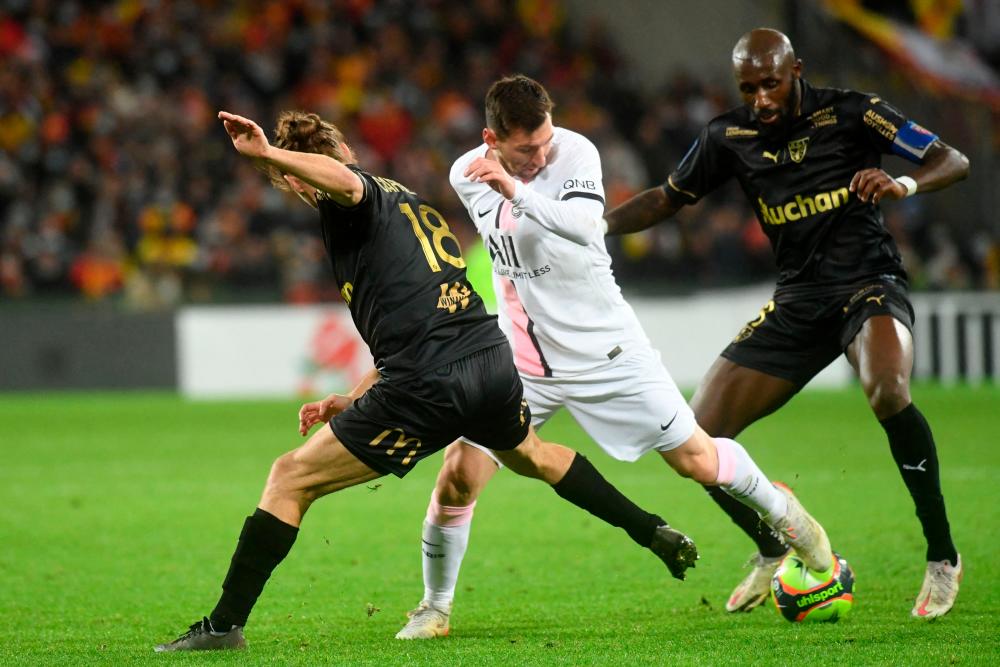 PARIS: Georginio Wijnaldum’s injury-time equaliser allowed Paris Saint-Germain to snatch a 1-1 draw away to Lens in Ligue 1 on Saturday in a match which confirmed Lionel Messi’s difficulties adapting to the physical nature of French football.

Messi was floored by a strong tackle and some PSG players stopped playing in the build-up to Seko Fofana’s goal which gave Lens a 62nd-minute lead in northern France.

It looked as if that would be enough for Lens to claim a victory which would have been just reward for an outstanding performance that delighted their supporters in a crowd of close to 37,000.

However, PSG equalised in the second minute of injury time as Kylian Mbappe crossed for fellow substitute Wijnaldum to head home.

It is a second draw in as many matches for the Qatar-owned club, who extend their lead at the top of Ligue 1 to 13 points from Marseille, beaten 2-1 at home by Brest earlier on Saturday.

Despite their big lead at the top of the table, it was yet another unsatisfactory performance from Mauricio Pochettino’s disjointed team of superstars, who have usually had enough individual talent to get results this season but have rarely convinced.

Six of their league wins in this campaign have come with goals scored from the 79th minute onwards, and here they were rescued by Wijnaldum’s last-gasp intervention.

It was a PSG side missing Neymar, who is out with an ankle injury and not expected to return before mid-January, while their nine-goal top scorer Mbappe was rested at kick-off before coming on to help save the day.

Messi still has just one goal from nine Ligue 1 appearances and he struggled to make his presence felt against an impressive Lens side who lie fifth in the table.

The Argentinian won his seventh Ballon d’Or at the start of the week but made little impact in Wednesday’s 0-0 draw with Nice and was little better here, although he did hit the post with a shot from outside the box early on.

Angel Di Maria was also denied by an outstanding Jean-Louis Leca save in stoppage time at the end of a first half in which Lens had been the more impressive side, and the hosts went ahead just after the hour.

Facundo Medina won back possession with a crunching, but fair, challenge on Messi, who stayed down.

As Marco Verratti stopped and called for the ball to be put out of play, Lens continued and former Manchester City midfielder Fofana let fly from outside the area with a powerful shot that was fumbled into the net by Keylor Navas.

David Pereira Da Costa then hit the post for Lens before Mbappe came on and almost immediately had a header from Messi’s flighted ball saved by Leca, who was eventually beaten at the death by Wijnaldum.

Earlier Marseille threw away the lead to lose at home to a Brest team on a record winning run.

Brazilian international Gerson opened the scoring in the first half for Marseille with his second goal in as many games after playing a one-two with Dimitri Payet.

However, Brest drew level early in the second half as Romain Faivre scored a penalty after a handball by Boubacar Kamara.

Franck Honorat then crashed a superb winner in off the underside of the crossbar as the Brittany side made it six successive league wins, the best run in their history in the top flight lifting them to sixth.

Before that the league’s leading scorer Jonathan David equalised with his 11th goal of the season after Troyes had gone in front.

Lille will qualify for the last 16 of the Champions League in midweek provided they avoid defeat away to Wolfsburg in Germany. - AFP