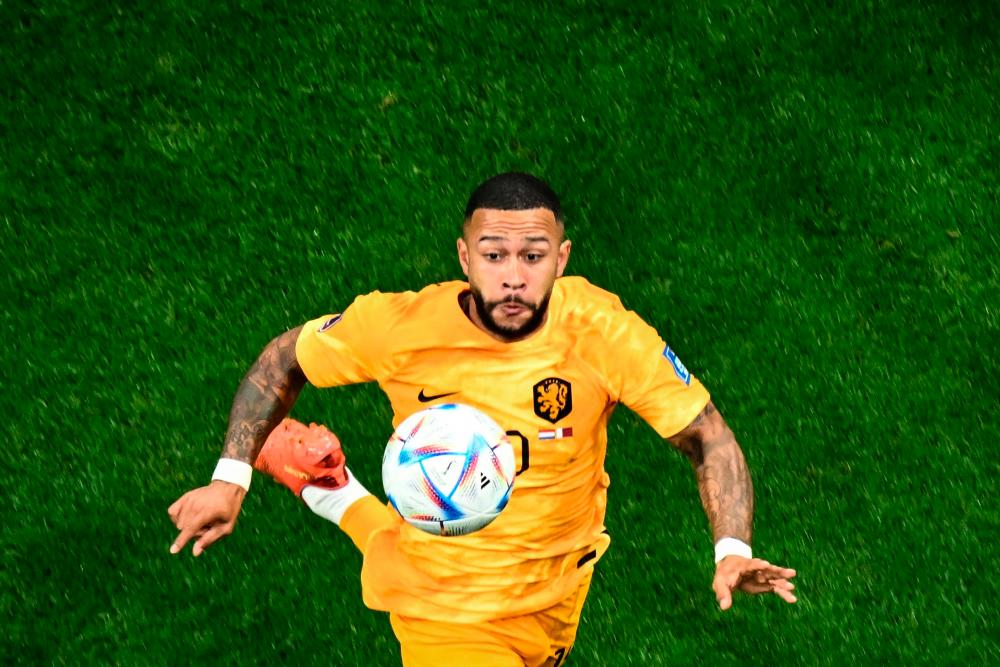 Netherlands’ forward #10 Memphis Depay eyes the ball during the Qatar 2022 World Cup Group A football match between the Netherlands and Qatar at the Al-Bayt Stadium in Al Khor, north of Doha on November 29, 2022. AFPPIX

AL KHOR: Netherlands coach Louis van Gaal said the return of Memphis Depay to the starting line-up was a plus point for his team after they reached the World Cup last 16 on Tuesday by brushing aside Qatar.

Depay was involved in both goals, scored by Cody Gakpo and Frenkie de Jong, in the 2-0 win as the Dutch finished top of Group A.

The Barcelona winger, who appeared as a substitute in the Netherlands' first two games, was making his first start since suffering a hamstring injury in September.

“A difference was that Memphis was playing,“ said Van Gaal. “We have to bring him in gradually because he hasn’t played much in two months.”

Midfielder Marten de Roon also made his first start of the tournament after an injury-troubled build-up.

Bayern Munich centre-back Matthijs de Ligt has not featured since the opening 2-0 win over Senegal, but Van Gaal said he would be fit for the knockout phase.

“I had to adjust my vision in many ways because players were not fit ahead of the World Cup,“ said the former Manchester United manager.

“I’m so pleased that they’re fit now... They overcame all these problems and now we don’t have any injured players.

“We did what we needed to do. We’re group winners.”

Gakpo scored for the third straight match to continue his remarkable season.

The 23-year-old, heavily linked with a possible move to Manchester United, also has 13 goals and 17 assists for PSV Eindhoven this term.

Three-time World Cup runners-up the Netherlands will face the second-placed team from Group B -- featuring England, Iran, the United States and Wales -- in the last 16 on Saturday. - AFP