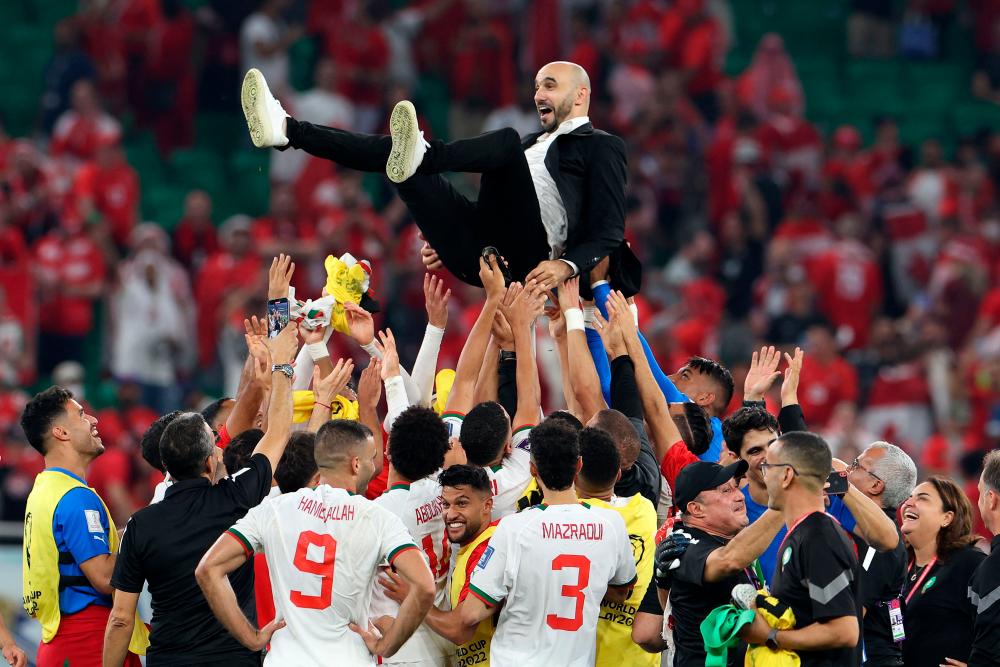 Morocco’s coach #00 Walid Regragui is thrown into the air as his players celebrate winning the Qatar 2022 World Cup Group F football match between Canada and Morocco at the Al-Thumama Stadium in Doha on December 1, 2022. AFPPIX

DOHA: Morocco coach Walid Regragui said the Atlas Lions are ready to “aim for the sky” after reaching the World Cup knockout rounds for the first time in 36 years on Thursday.

The North Africans sealed their passage into the last 16 with a 2-1 win over Canada which saw them finish ahead of Croatia on top of Group F.

Regragui said his team’s performance in the first phase was down to a determination to “change the mindset” of Morocco’s national team, who had not advanced to the knockout rounds since the 1986 finals prior to arriving in Qatar.

Now France-born former Morocco international Regragui says the team is dreaming of going further than the last 16 -- even winning the tournament.

“We set ourselves an objective -- we said we wanted to give everything we’ve got and get out of the group stages. We can tick that box now,“ Regragui said.

“We know that African teams need to set themselves objectives. We drew with Croatia. We beat Belgium. We beat Canada. We’re realistic, but we know what we’re worth. We’ll take it one game at a time... But if we’re 100 percent and fighting fit we’re capable of great things.”

Regragui, who only took over as Morocco coach in August after the dismissal of predecessor Vahid Halilhodzic, said he had been determined to model Morocco's mental approach on European and South American teams at the World Cup.

“Right from the beginning I have been talking about changing our mindset,“ Regragui said. “We didn’t come here just to play and say ‘We almost qualified (for the last 16)’.

“We want to play our own game, but we also need to get the results and do as all European or South American teams do. We need to emulate them. I don’t see any teams here that have just come to play. They come with a plan.

“So there is the mentality change. We didn’t want to fall prey to this negativity. The idea is to stay strong. We need to duplicate the play of European teams, with our own values. That’s what I tried to do today.”

Morocco will face the runner-up from Group E -- one of Spain, Germany, Japan or Costa Rica -- in the last 16. - AFP