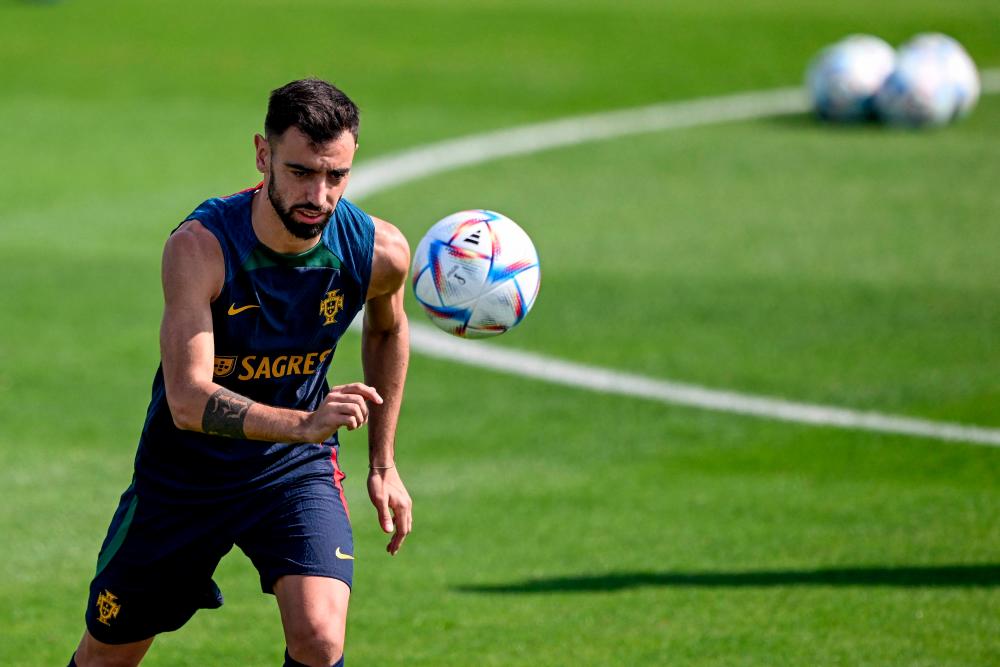 DOHA: Cristiano Ronaldo’s shadow looms large over Portugal at the World Cup, but away from the flash of camera phones and rolling headlines, Bruno Fernandes has taken the reins.

Fernando Santos’ team are synonymous with their leading man, a black hole for media attention and fan admiration, reducing his colleagues to a supporting cast, inadvertently or not.

However in Qatar playmaker Fernandes is emerging as the team’s true creative leader, sealing qualification for the last 16 with a game to spare.

With several changes but Ronaldo still leading the side, Portugal fell to a 2-1 defeat by South Korea on Friday but finished top of their group and face Switzerland.

Fernandes was rested, wrapped in cotton wool, and without him Portugal failed to create many clear chances.

Still, supporters swooned over veteran striker Ronaldo -- save some Korea fans who instead chanted for “Messi” -- even as the all-time record international goalscorer floundered up front.

Instead it is Fernandes, no longer a club team-mate of Ronaldo after his dramatic departure by mutual consent ahead of the World Cup, who has been the beating heart of the side this year.

It was Fernandes who picked up the pieces in Portugal’s press conference ahead of their opening game against Ghana, fielding questions on the Ronaldo drama.

Then on the pitch he was a quiet mastermind, providing two assists in the 3-2 win, even as Ronaldo basked in the limelight after winning a soft penalty and dispatching it to open the scoring.

It’s an age where most players would have retired by, but Ronaldo chugs on, having pledged to play until 40, at least.

So that shadow stretches further, but under it, Portugal have a lot of younger, dynamic talent, itching for a chance to break through.

Rafael Leao, Andre Silva and Goncalo Ramos are all interesting, young attacking options but started on the bench against Korea, with Ronaldo failing to make an impact.

Manchester City midfielder Bernardo Silva is another underrated, smooth presence but at the 2022 World Cup it is Fernandes who has taken on the role of floor manager, the man running the show at the tip of the midfield.

In Portugal’s 2-0 win over Uruguay Fernandes’ brace clinched qualification, with only the post denying him a hat-trick.

Even when Ronaldo is not involved, he still creeps in, appearing to claim a goal against Uruguay which was ultimately given to Fernandes.

The 28-year-old, like Ronaldo a former Sporting Lisbon player, is set to return to the side against Switzerland on Tuesday, and Portugal should look more like themselves again after their Korea blip.

Fernandes is an established star, but still young enough to take on the role of creator-in-chief, and as a figurehead is a different prospect to Ronaldo -- where all roads end, the man who applies the finishing touch.

Even on that front, Fernandes is ahead in 2022, with seven goals for his country in 11 games, to Ronaldo’s three in 10.

The Manchester United playmaker is also capable of providing them, unselfishly saying he thought Ronaldo had headed home his cross against Uruguay which found the net.

“I celebrated as if it had been Cristiano’s goal,“ he explained.

“It seemed to me that he had touched the ball. My aim was to cross the ball for him. We are happy with the victory regardless of who scored.”

Fernandes has often been diplomatic when speaking to the media, even when repeatedly questioned about Ronaldo.

“It was a dream to play with him,“ he said, of their days together at Manchester United. “But nothing lasts.”

Wise, measured responses, issued like the kind of perfectly weighted passes Fernandes aims to deliver Ronaldo and co as Portugal set their sights on a first World Cup trophy. - AFP