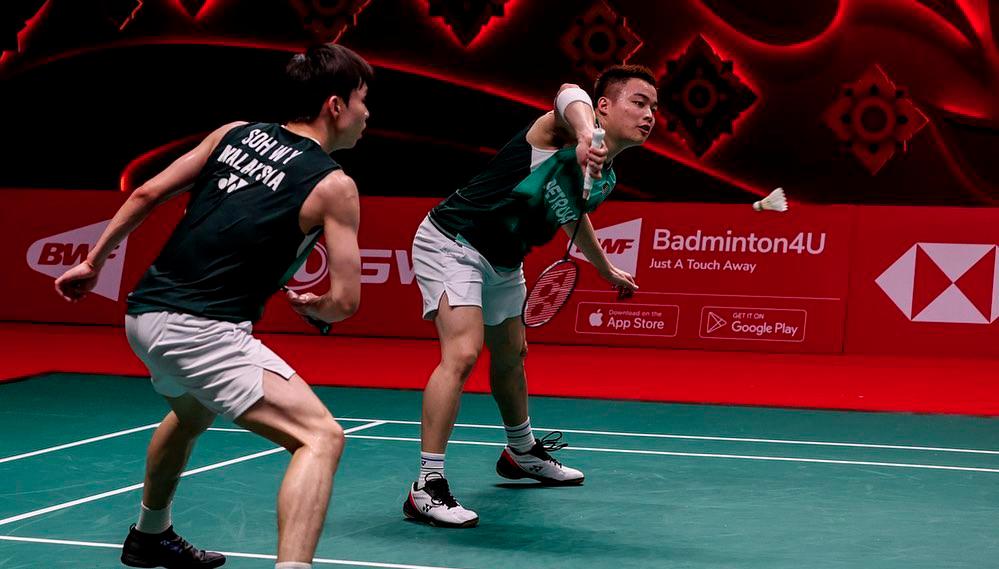 In the Group B match, Aaron-Wooi Yik went down fighting to fourth seeds from China, Liu Yu Chen-Ou Xuan Yi 21-23, 24-22, 16-21 in a battle that lasted one hour and six minutes at the Nimibutr Arena.

However, professional men’s doubles duo Ong Yew Sin-Teo Ee Yi got their campaign back on track as they got past Choi Sul Gyu-Kim Won Ho of South Korea in Group A after losing 19-21, 16-21 to defending champions, Takuro Hoki-Yugo Kobayashi of Japan in the first match yesterday.

“Yesterday’s loss was a good lesson for us. We admitted we wanted to win so much (against Hoki-Kobayashi) but today we tried not to give too much pressure on ourselves and enjoyed the game. I am happy that we finally made it,” Ee Yi told BWF in the mixed zone after the match.

A tricky journey awaits Yew Sin-Ee Yi, seeded third, in their final quest to earn a last four ticket as they will be facing top seed, Fajar Alfian-Muhammad Rian Ardianto of Indonesia, tomorrow.

Pearly-Thinaah, meanwhile, suffered a straight set defeat against China’s Chen Qing Chen-Jia Yi Fan, 13-21, 15-21 in Group B while Vivian Hoo-Lim Chiew Sen were also eliminated as they went down to home pair, Benyapa Aimsaard-Nuntakarn Aimsaard, 9-21, 12-21 in Group A.

After notching a sensational win against Olympic champions Wang Yi Lyu-Huang Dong Ping of China 23-21, 14-21, 21-16 in Group B, independent mixed doubles pair Tan Kian Meng-Lai Pei Jing failed to keep their momentum as they were humbled by Dechapol Puavaranukroh-Sapsiree Taerattanachai of Thailand, 9-21, 11-21.

Kian Meng-Pei Jing could still advance to the semis should they beat another home duo, Supak Jomkoh-Supissara Paewsampran in a must-win final group tie tomorrow.

Onto the Group A match, it was the end of the road for another county’s professional pair, Goh Soon Huat-Shevon Lai Jemie after they recorded their second loss in a row, this time against French duo, Thom Gicquel-Delphine Delrue, 21-16, 18-21, 17-21. - Bernama