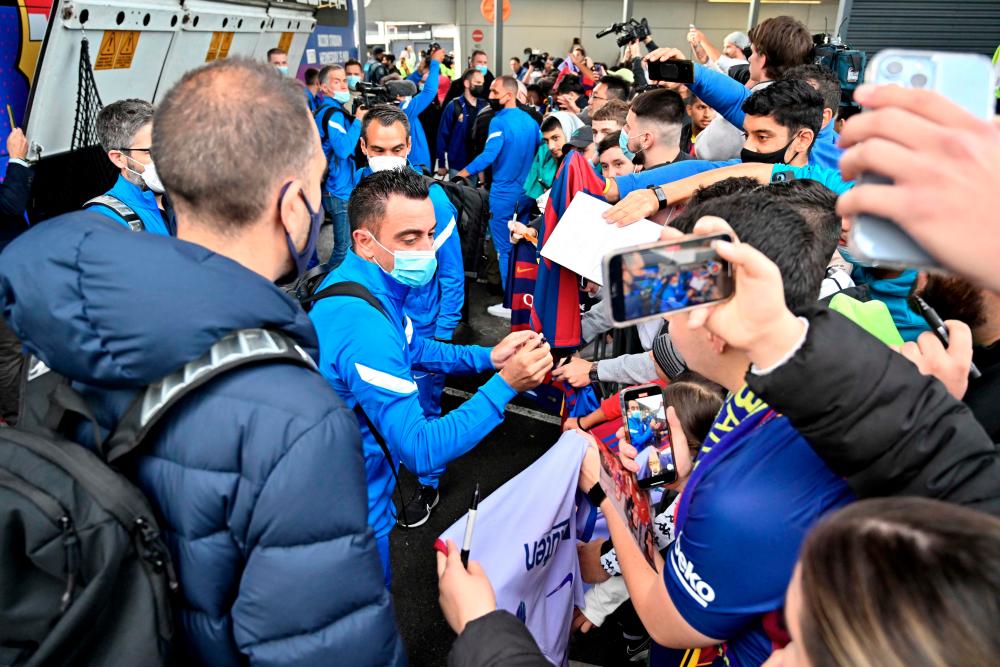 Head Coach Xavi Hernandez (L) of FC Barcelona signs autographs to fans at Sydney International Airport on May 24, 2022, on the eve of their friendly match against A-League All Stars team in Sydney. AFPPIX

SYDNEY: Coach Xavi Hernandez said today his Barcelona team must be rebuilt after a turbulent season but refused to be drawn on whether Robert Lewandowski was a transfer target.

The Catalan giants finished 13 points behind La Liga champions Real Madrid, their campaign ending in a whimper on Sunday with a 2-0 home defeat to Villarreal.

Barcelona were beaten in four of their last nine games in all competitions.

Gerard Pique and teenage forward Pedri were among those missing.

“Next season we need to improve a lot, we improved a lot since November,” said Barcelona midfield legend Xavi, who was appointed in November with the team lying ninth.

While he helped revive them and they achieved the most important objective of qualifying for the Champions League, they went out to Frankfurt in the Europa League quarterfinals and in the last 16 of the Copa del Rey.

“I think we are in a good way, we have to be positive. But next season, at least, we need to compete and win the Champions League, why not,” said Xavi.

“We are rebuilding the team. We have a plan, of course, and we need to be competitive next season. We cannot permit another season without winning titles.”

Prolific Bayern Munich forward Lewandowski, who was top scorer in the Bundesliga last season for the fifth year running, has been heavily linked with Barcelona.

Xavi refused to confirm his interest when asked by AFP.

“I cannot confirm Lewandowski or any other names,” he said.

“Of course we are working hard and it is obvious that we need to improve.

“It’s a matter of time,” he added of unveiling new players.

“If we have to announce something we will announce it, but it is not the moment right now.” - AFP