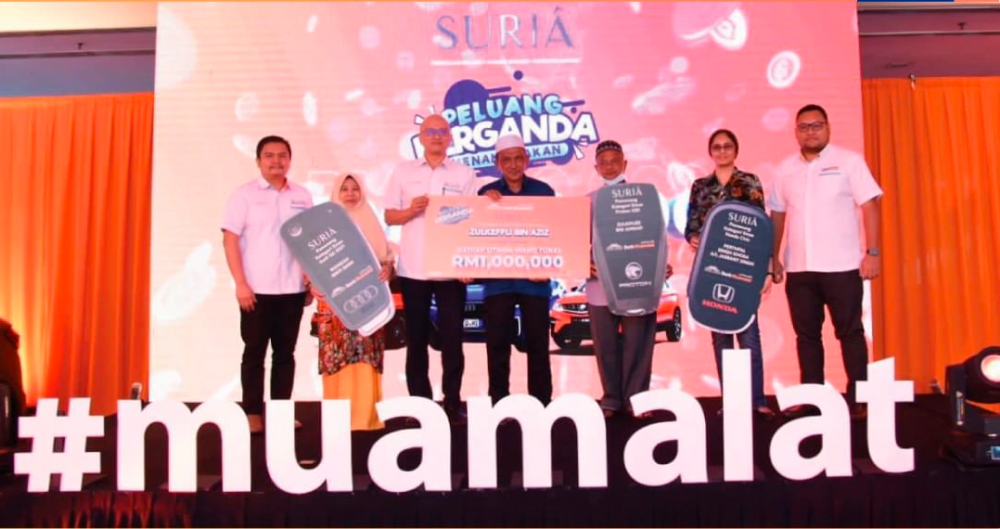 “I would like to congratulate all the winners of the SURIA campaign. This campaign has provided an opportunity for the public not only to invest but also win fabulous prizes,” said Zury.

“Through savings and investments, customers will be able to form a safety net to weather any economic uncertainty. Bank Muamalat encourages its customers to invest actively and consistently to meet their financial commitments,” added Zury.

The SURIA campaign was held from 1 August 2021 until 31 July 2022. New customers aged 18 and above, who opened a SURIA account, were eligible to participate in the campaign, while existing customers, participated by converting their savings account to the new investment account.

In view of the encouraging response, the Bank has launched the “Super Saver, Superb Prizes” campaign from 1 August 2022 until 31 January 2023 for both Savings Account and Mudarabah Unrestricted Investment Account (SURIA). 1,242 prizes worth RM1.74 million are up for grabs in the campaign. Top prizes include a cash prize of RM1,000,000 and two cars (Honda City and Honda CRV).

For more information on the “Super Saver, Superb Prizes” campaign and other Bank Muamalat products and services, please visit our website at www.muamalat.com.my or contact our Customer Service Centre at 03-2600 5500.