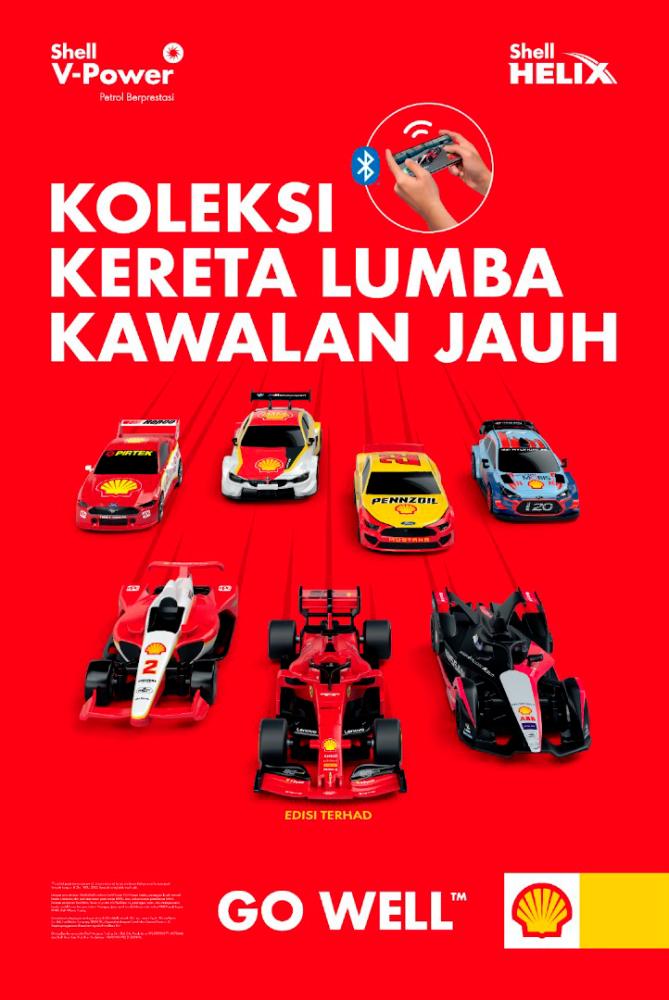 KUALA LUMPUR: Bring out your inner child and race together with family and friends with the latest Shell Motorsports Collection featuring Bluetooth-controlled cars from some of Shell’s most prestigious partnerships in the motorsports arena.

For the first time, an array of OEM and Motorsports partnerships were brought together to tell the story of Shell’s differentiated fuel, Shell V-Power’s performance. The strength of our Shell V-Power is reflected in our robust partnership, where Shell tested the fuel performance in extreme condition on the track and applied it to the fuels available for customers on the road.

The latest Shell Motorsports Collection of high-performance cars features 7 models from some of the world’s top motorsport teams partnered with Shell. These models include:

The Shell Motorsport Collection has a special feature, the proprietary Smart Battery, which integrates a Bluetooth chip within a rechargeable lithium cell, developed in partnership with BrandBase and 12 right holders such as Ferrari, BMW, Hyundai, Ford, and Nissan.

Each car has an electric engine and can be seamlessly controlled by the player’s smartphones via the Shell Racing app. This free app, which is available on App Store and Google Play, combines both remote and digital play.

“Shell was there alongside the earliest motorsport pioneers and had an embedded history within motorsport. The latest collection celebrates some of the best race cars that redefined the racing world such as the Hyundai i20 hybrid rally car and Team Penske’s Indycar,“ Lee Ming said.

The Hyundai i20 hybrid rally car won the latest WRC championship in Greece and has secured victories on all terrains – gravel, snow, mixed, and tarmac. On the other hand, Team Penske’s Indycar is a trailblazer in the Indycar industry and boasts a 100% renewable race fuel with a 60% greenhouse gas emissions reduction.

“Our customers have always been at the heart of our business. Every time they stop at Shell, we want them to have an opportunity to create unforgettable memories with their family and friends. With our latest collection, we are happy to offer our customers a quick escape from reality, while enjoying an adrenaline-thrilled RC race with their loved ones, anywhere,” she added.

Beginning from Oct 8 till Dec 8, the limited-edition Bluetooth remote-control cars will be released one model per week exclusively at Shell Stations nationwide. Customers can purchase the Motorsport Collectors box at RM80 when they pump Shell V-Power Racing fuel for RM80 in a single receipt.

Separate car models or a smart Bluetooth battery are available at RM30 with a minimum fuel purchase of RM50 to complete the collection. Alternatively, customers can get the exclusive Ferrari SF90 racing car and one SMART battery for free when they buy selected Shell Helix Lubricant 4L at Shell stations.

To commemorate the launch of the latest remote-controlled collection, Shell is organising an event at KL Sentral from 17th to 23rd October and at Mid Valley Megamall from 26th to 30th October to give the public an exclusive experience to try all 7 racing car models on racetracks designed specifically to present each car in their winning atmosphere. Visitors will be treated to a viewing of the legendary Hyundai i20 WRC replica that clinched the latest WRC Championship title in Greece on site as well, as an introduction to Shell’s rich motorsport partnerships history over the years.

Remember to grab these limited-edition highly collectable Bluetooth-controlled cars before it’s gone as they will only be available on all shell stations nationwide from 8th Oct to 8th Dec. While stocks last.