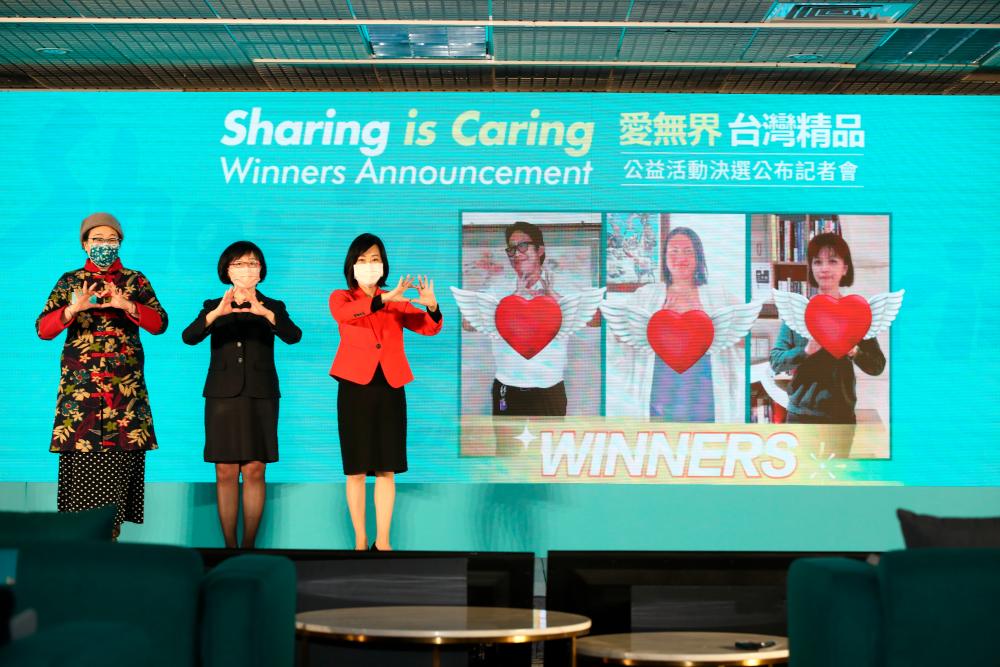 Taiwan Excellence: Sharing is Caring is the first global philanthropic Campaign launched by Taiwan’s Bureau of Foreign Trade (BOFT), Ministry of Economic Affairs. With support from the industry, three winning proposals will be funded and executed in hopes to help address social or environmental issues with Taiwan Excellence winning products.

Out of 781 creative proposals, there were 12 finalists from 9 countries. On 26th January 2022, Cynthia Kiang, Director General of BOFT, virtually presented the certificates to the top three proposals, which are selected after careful and detailed deliberation.

Director-General Kiang expressed that she was excited to see the amount of interest garnered despite this being the first time they held this event, and that shows the potential of how much will be achieved in the future. “This shows how much love and care there is everywhere in the world,” emphasized Kiang. “At the same time, the Taiwan Excellence winning companies will continue to spare no efforts in pushing forward the UN Sustainable Development Goals (SDGs) via the Campaign.”

Marareia Hamilton, who represented the team for the winning proposal titled Solar Solutions for Indigenous Māori Communities from New Zealand, explained that they have long been devoted to the development of Māori communities. Aiming to help establish workable business models for the locals, one of the issues they proposed to solve is the unstable power supply due to grid stability issues in the remote areas. Thus, the team has proposed to install solar panels from Taiwan and to build a self-sustaining green energy power generation system within the communities. During the ceremony, Hamilton also expressed her gratitude to Taiwanese Excellence for lighting up the Māori communities, and for bringing Taiwan and New Zealand closer.

The objective for the Educating and Empowering the Community through Mobile Kart proposal from the Philippines is to narrow the education gap for the children in remote villages and cities while being environmentally friendly. The winning team put together a mobile classroom – a kart powered by solar panels and equipped with laptops and internet so that children in remote areas can learn how to use computers and get connected. The proposer, Jonathan J. Cartilla, thanked the Campaign for the opportunity as they now will be able to provide education for the children in the slums.

The last winning proposal is from Yilan, Taiwan, titled One-day Medical Tour and Same-day Denture Delivery - Mobile Digital Denture Clinic & Oral Health Service Project. The objective of this proposal is for the healthcare and well-being of elderly people in rural areas by using a mobile medical vehicle that is equipped with dental care devices for measuring their biodata. The team pointed out that with the Taiwan Excellence winning products, they’ll be able to ensure the quality of their healthcare services by bringing the charity of Taiwan Excellence to some of the farthest and remote corners of Taiwan.

One of the judges, professor Chu Jou-Juo, expressed that she was impressed with all the well-intentioned proposals. However, she stated that a mere creative philanthropic idea is not enough. Feasibility and practicality had also been taken into consideration so that they could ensure that the good idea can be turned into reality. Besides that, she also hoped that more companies will join future events as on board and fulfil their corporate social responsibility.

Finally, the event ended with a lucky draw announcement for those who voted online for which team they thought would win. Three winners who voted for the right proposals were selected to get prizes worth NT$50,000 (RM7,540).

To see the list of lucky draw winners, visit https://share-care.taiwanexcellence.org/