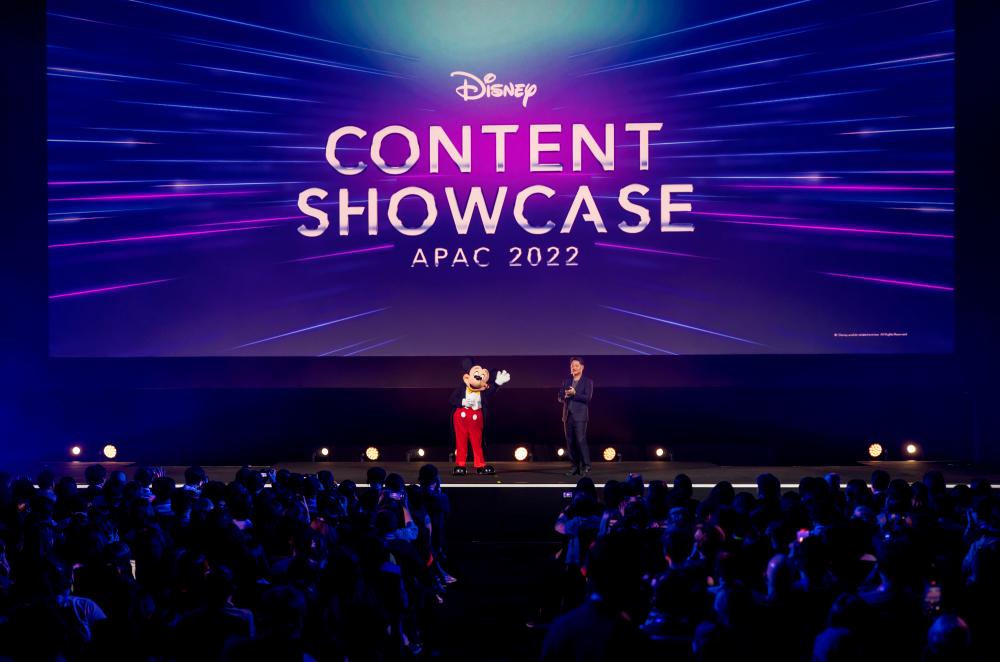 Luke Kang and Mickey Mouse opens the Disney Content Showcase in Singapore. – All pix Courtesy of The Walt Disney Company

More than 400 members of the media were treated to a sneak peek of upcoming movies and series from Marvel Studios, Walt Disney Animation Studios, Pixar, Lucasfilm and new APAC Originals for Disney+ and Disney+ Hotstar.

“Last October, at our first APAC Content Showcase, we made our first step into local content production with an ambitious, long-term plan to uncover the world’s best stories from this region, and to showcase creative excellence that can shine on the world stage,” said Kang.

With so many titles and movies announced, anime fans were not left behind as delighted as Choi announced an expansion of Disney’s fruitful relationship with Japanese publishing house Kodansha.

“We are thrilled to deepen our strategic collaboration with our long-standing partner Kodansha on such an exciting genre. Japanese anime fills the white space in our content development plans and we believe this expanded collaboration will be a game changer in Disney’s future animation strategy in Japan. We look forward to bringing the anime titles and prized IP by Kodansha to the world stage.”

The partnership will see the licensing of exclusive manga titles by Kodansha, starting with the popular Tokyo Revengers: Christmas Showdown Arc, which will launch on Disney+ Hotstar in January 2023.

The showcase featured a slate of global tentpole titles first presented at D23 Expo in Anaheim, including:

Pixar: Elemental, Win or Lose, Elio, Inside Out 2

“Our aspiration is for stories from the Asia Pacific region to be a key pillar for the next 100 years,” said Choi. “Our curated content from APAC is a key part of the unparalleled storytelling and creative excellence The Walt Disney Company is known for, and we look forward to further showcasing storytelling excellence from the region on the world stage.”

Key highlights of the new APAC content slate include:

>House of the Owl

>BTS MONUMENTS: BEYOND THE STAR

Exclusive footage of singer/actress Halle Bailey’s stunning and emotional rendition of Part of Your World from the upcoming live-action adaptation of The Little Mermaid drew some of the biggest praise from the event. Guests were also treated to exclusive footage from James Cameron’s highly anticipated Avatar: The Way of Water in 3D.

The star-studded show cemented Disney’s commitment to establishing itself further in the streaming market in 2023, with its sights squarely aimed at taking the top spot. And considering the big budgets and even bigger IPs it has in its arsenal, audiences are definitely looking forward to what’s in store for them in the future. 2.Rural development programmes should be relevant to current needs: Zahid