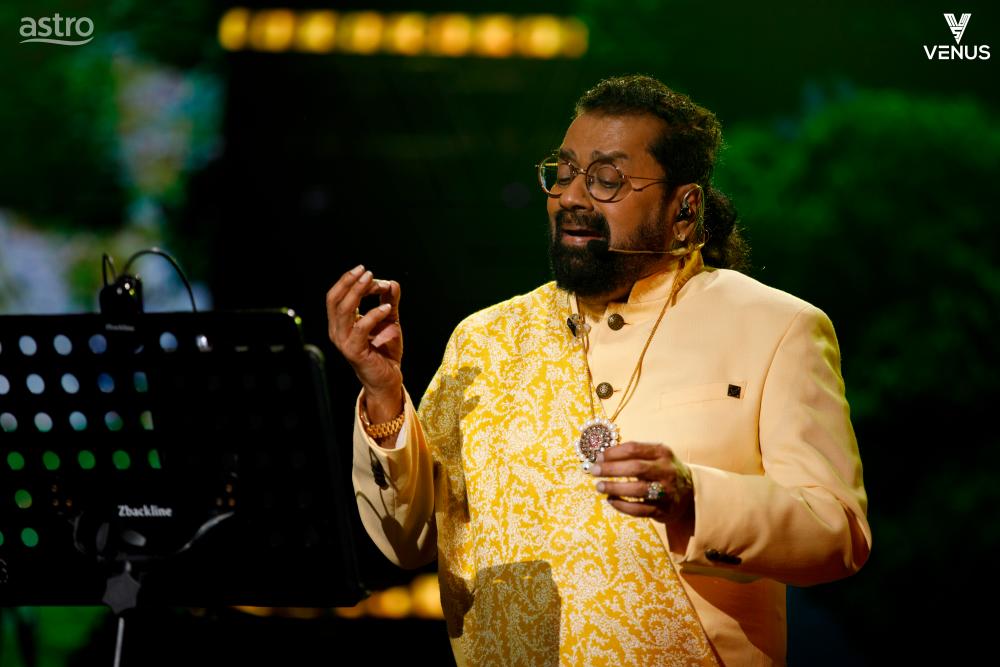 Playback singer Padma Shree Hariharan started his career in 1977. – ALL PIX BY ASTRO

Indian playback and ghazal singer Hariharan has had songs featured in Tamil, Hindi, Malayalam, Kannada, Marathi, Bhojpuri, and Telugu films, among others. He is also referred to as one of the creators of Indian fusion music. He received the Padma Shri award from the Indian government in 2004 and has won two National Awards.

In collaboration with Lesle Lewis, Hariharan formed the two-member band Colonial Cousins. They have created several albums of their own music and have also composed music for a number of Tamil and Bollywood feature films. Emcee, Anandha Rajaram took to the stage at the Putrajaya International Convention Centre and took the opportunity to thank all the sponsors.

Well-known local artistes Kumaresh Kamalakannan and Hashmitha Selvam were the opening act. It was great to see our local artistes share the stage with such great international performers.

The crowd cheered and applauded enthusiastically as 67-year-old Hariharan finally made a dramatic entrance onto the stage while performing his popular song Anbae Anbae Kollade.

The legendary performer captivated the fans with his songs and musical prowess throughout the first performance. He used the opportunity to convey his appreciation to the crowd for continuing to show him affection after the opening song.

He said that Malaysia is one of his favourite nations to perform. He complimented the Malaysian supporters, calling them the “liveliest” and “most disciplined crowd.”

Lyrical vocalist Sri Nisha, who performed alongside Hariharan for the majority of the songs, as well as the honey-like voice of Haripriya, give a fantastic performance to the audience.

It felt so good watching such a legend perform on stage with ease. The singer clearly understands how to manage a crowd with his quips and dance movements, and his stage presence was excellent. The performer also enthralled the audience with his little step dancing to the “bullet song” by HariPriya.

My personal favourite performance by the legend was Arima Arima, with the live band, the stage set-up, including the background screen that projected the robots, and Hariharan’s remarkable dynamic voice. And of course, Hariharan’s famous Nenjukkul Peidhidum. When the film was initially released in 2008, the song was an instant smash. The movie’s soundtrack quickly became everyone’s favourite and remains so to this day.

It is also fair to say that the audience actually enjoyed Haripriya and Sri Nisha’s joint performance. Everyone was mesmerised by the popular song Mallipoo, and they joined in with the two stunning singers, adding to the beauty of the entire performance.

Thanks to their incredible talents, the live band made the show even more exciting. The emcee gave each member an opportunity to play their instrument and express themselves in a quick, enjoyable session while the artist had his outfit changed, proving why they were chosen to perform with the icon. Pure talent!

Sincerely, I’ve been listening to his music for more than ten years, and he has never let me down. Unquestionably, seeing Hariharan in person is a dream come true. It was such a fun night, and I can safely say that everyone who attended the event enjoyed every second of it, starting to end.

Overall, the Hariharan performance was awesome and stunning, and the entire Venus Production crew deserves huge props for making it a once-in-a-lifetime experience!