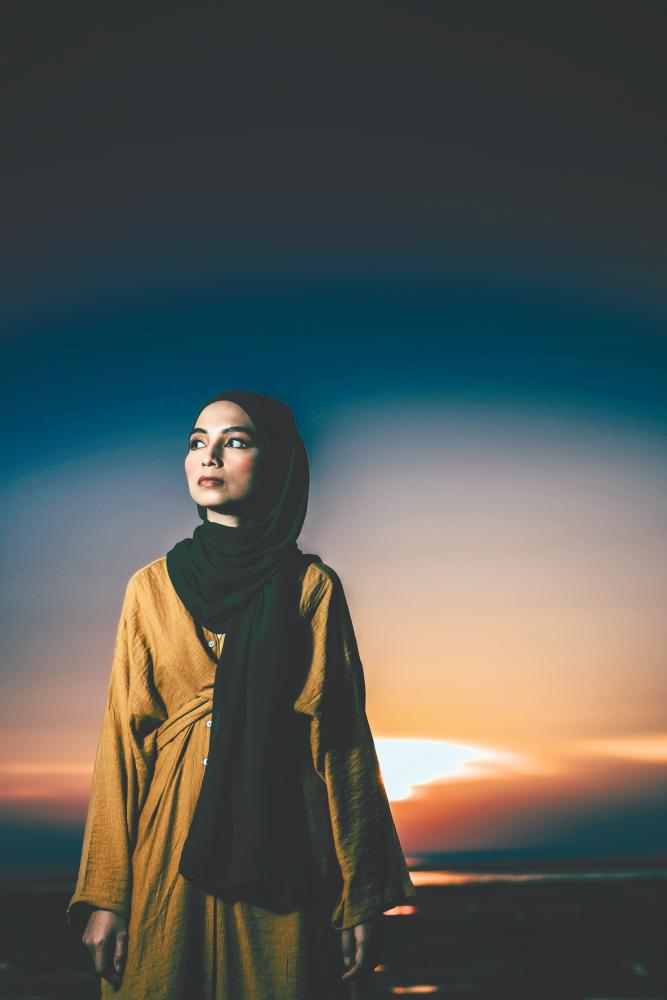 Wani initially did not realise her lyrics had poetic appeal. – by Sufian Abas of Laras Portraits

She has also written scripts for TV and stage productions.

Wani has been performing live since 2006 and she has also represented the country at arts events, music festivals, and poetry gigs in Singapore, Jakarta, Makassar, Banggai, Sydney, and Melbourne.

With her ability to write in three languages – Malay, English, and Javanese, Wani has published 11 books since 2009 including Langit Vanilla (2011), Untuk Yang Telah Pergi (2016) and her latest, Untuk Perempuan Yang Bernama (2020).

On top of it all, Wani is a staunch advocate for empowering families and women with MRKH (Sindrom Mayer–Rokitansky–Küster–Hauser) Syndrome, a rare disorder where females are born without a uterus and upper vagina.

After years of releasing EPs, Wani’s debut album Raskat was released this year.

Talking about her work, she described how poetry writing and songwriting go hand in hand.

“Most of my songs are made from poems I have published in my books. I turn them into lyrics and together with my band, compose them into songs. I don’t see them as two separate things.

“I see them as two things that go hand in hand especially with my newly released album, Raskat which is an acornym of the words Rasa and Kata. Most of the songs have lyrics from my previously published poetry books.”

Describing how she set the words to music, Wani explained, “honestly I started out as a singer songwriter in 2002 because I really loved music and lyrics. I loved memorising and reading up lyrics when listening to songs. I started learning the guitar and composing my own songs. It wasn’t until late that year a poet friend told me that my lyrics are actually poetry.”

That set Wani thinking. “The idea of poetry is really heavy and I did not view my lyrics in that way.“

Her friend encouraged her to write poetry and though she started as a singer songwriter in 2002, she only began publishing her first poetry book in 2011.

“So that is when I realised I had been writing poems all along. It was just that they were in the form of lyrics.“

There is a strong heritage in the East where poems are often sung.

“When I was a performing arts student in UiTM, that’s when I got used to being on stage and realised that poems are songs within the same family. Singing is just another form of delivering those poems.”

When talking about the poets whose works she admires, Wani said, “there are so many. I especially love Aisyah Rais. My mentor is actually Pak AGI – Abdul Ghafar Ibrahim.

“He used to teach me in UiTM. He was basically my first introduction to Malay poetry. I grew up in Subang and my family travelled a lot. My first language was English rather than Malay.

“My mum is Singaporean. Every country I went to, I spoke in English. It was only when I went to UiTM that I came to know about Pak AGI. I would say he is my mentor because he is very different and also very experimental when it comes to poetry.

“He doesn’t do the typical ‘deklamasi’. He acts out, he dances, he sings. I love what he does. I became inspired by the way he delivers poetry and so I stole some of that vibe and put it into my own work.”

Wani is currently working on a play that has some songs.

”We were supposed to stage it this year but then the pandemic happened. We hope to stage it next year, hopefully. I am writing the script as well as the songs and lyrics.”

The working title is Dua Alam.

Wani is hoping to stage it the traditional way. She is not ready to go online with theatre but on Jan 2, she and her band will be holding their online music showcase entitled Riang.

“It is going to be our first try on an online music showcase. So hopefully that will turn out well. With theatre I am not confident going online yet. Maybe it is because theatre is something so physical and you have to be there to feel it.

“If the pandemic goes on any longer, I may have to consider it but I am not ready to do it, not yet.”