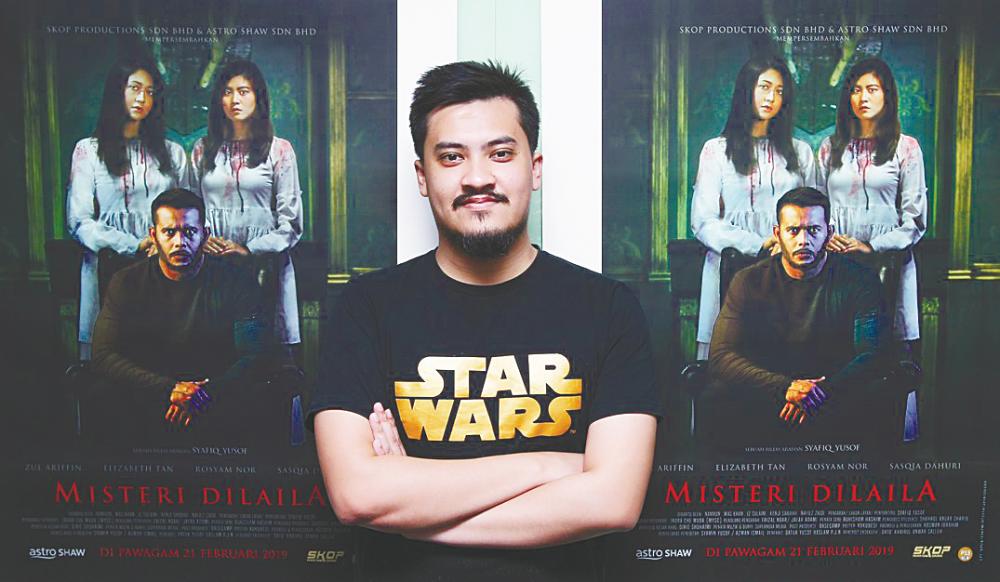 Syafiq has plenty of surprises in store for the audience in his latest horror film, Misteri Dilaila. — Sunpix by Zulkifli Ersal

THE trailer for Misteri Dilaila looks amazing, exciting and scary. It hints that the film will have audiences sitting on the edge of their seats.

But detractors claim that by showing so much of the scary elements in the trailer, director Syafiq Yusof has left no surprises for movie-goers.

However, Syafiq insists there is a lot more to Misteri Dilaila, his eighth film to date, than meets the eye.

“I am playing a mind game with my audience,” the 27-year-old says in an interview with theSun at his office in Kuala Lumpur.

“I am not telling the story in a linear timeline. There are lots of plot twists. I have done plot twists in my previous films, but I think this is my best work yet.”

Misteri Dilaila tells the story of Jefri, a businessman, whose wife Dilaila goes missing one day while they are on holiday at Fraser’s Hill.

He searches for her frantically but does not find her. Later in the night, an imam named Aziz shows up at his bungalow with news that he has found Jefri’s wife. But Jefri insists that the woman with Aziz is not his wife, while the woman keeps saying that she is Dilaila.

The plot hinges on who is actually lying and why.

Meanwhile, actor-director Namron plays the imam. Others in the cast include Datuk Rosyam Nor and Mas Khan.

“I never liked cold weather,” he admits. “But I had to be on set at 7am. Sometimes, I felt like I was in London.”

However, Syafiq says there was a reason he chose to set his film there.

“I purposely wanted to shoot somewhere far from Kuala Lumpur,” he says. “I want to show different cinematic images to my audience.

One wonders if Syafiq is trying to differentiate his film from Munafik 2, last year’s hit horror film helmed by his brother Syamsul.

Munafik 2 became the highest-grossing Malaysian film of all time, with some RM40 million collected at the box office.

“I did not want to repeat what my brother has done.”

When asked if there is rivalry between the brothers, Syafiq laughs.

“To me, Syamsul is more the expert than me. He is more focused and he knows what he wants. He is very confident and I admire him for that.”

Next month, Syafiq will begin working on the third film in his Abang Long Fadil franchise.

The first film, released in 2014, was a huge success, grossing more than RM4 million, while its 2017 sequel was even more successful, raking in more than RM18 million.

“This time, I am focusing more on the comedy rather than the action,” Syafiq says.

He is also producing Namron’s next film Masterpiecisan which daringly deals with the theme of racism.

“The film has a simple plot. But the ideology behind [it] is so brave and honest,” he says.

Every film director has a dream project, and Syafiq is no different. His dream is to make a film that will touch upon every race and religion in Malaysia.

“I do not have a storyline in my mind at the moment,” he says. “But it will be a film that will showcase what Malaysia is about.”

One wonders if Syafiq is inspired by the late Malaysian filmmaker Yasmin Ahmad, whose films showcased the harmony between people of different races.

But he quickly dismisses the notion that he is aiming to be the next Yasmin.

He says: “My dream project will be an action film. Perhaps, it could be a disaster film, and how we as Malaysians react to the disaster taking place in front of our eyes.

“All of us have our own ideas of how Malaysia should look like. Currently, people keep telling us that we should be more united.

“I get annoyed whenever I hear that statement. It implies we have some serious problems with each other.

“Personally speaking, I think we [were] united a long time ago.”