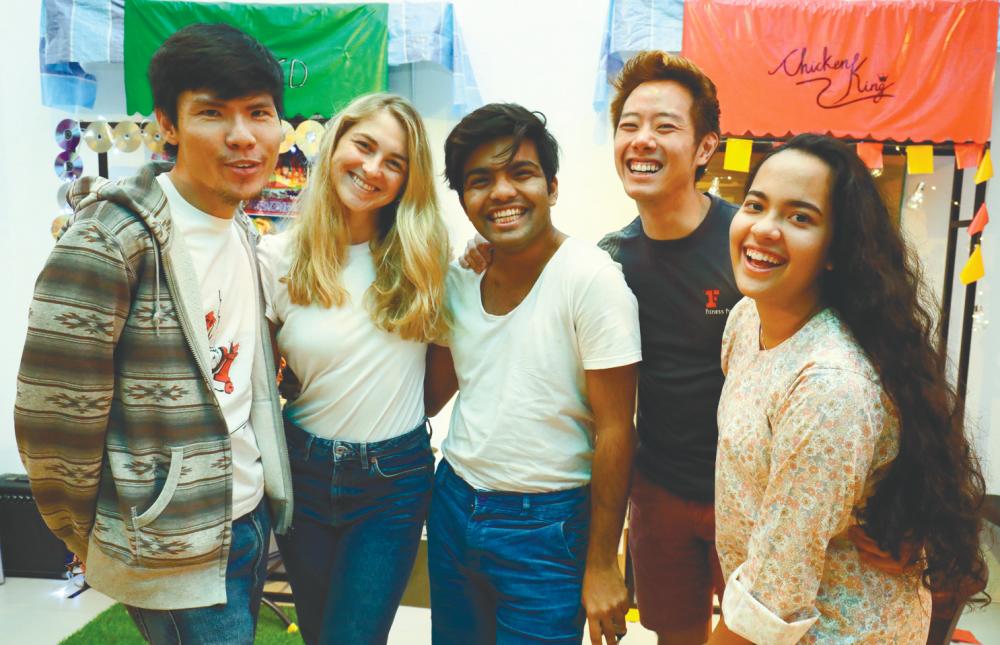 Honouring Yasmin’s Sepet ... (left, from far left) Wai Leong, Shields and Shafeeq with their lead stars, Gui and Badrika; who take on the roles played by (right) Sharifah and Choo in the film. – MASRY CHE ANI/THESUN

WHEN Yasmin Ahmad’s Sepet was first released in cinemas in 2005, the film grabbed the attention of both audiences and critics.

The late filmmaker’s depiction of a love story between two teens of different race and religion was something daring and out of the norm at that time.

The 90-minute Sepet the Musical premiered at the GM Bukit Bintang Mall (GMBB) in Kuala Lumpur last Thursday, with a second run from tomorrow till Sunday, and again from Oct 4 to Oct 6.

“Even today, interracial relationship is shunned in Malaysia. Putting love first is what Yasmin did in Sepet and that is what we are trying to do with the musical.”

Shields concurs, adding that “[Yasmin] promotes interracial harmony in Sepet. You learn that there are more things that unite us than divide us”.

Sepet is just one of a handful of touching films and advertisements directed by Yasmin, which still hold a special place in our hearts, The filmmaker died 10 years ago, aged 51.

Shafeeq, 26, remembers watching Sepet at age 14 and was completely besotted with the way Yasmin had presented a simple love story in the most meaningful manner.

He feels this musical is the perfect tool to re-introduce Yasmin’s legacy to a new generation of audience who have not seen her work, like his 16-year-old sister.

It is also one way for Liver&Lung to pay homage to Yasmin, Shafeeq adds. As such, they have followed closely to the film’s storyline, which is set in Ipoh (Yasmin’s own hometown).

The story focuses on the budding romance between 19-year-old Chinese VCD seller Jason (played by Choo Seong Ng in the film) and smart Malay schoolgirl Orked (Sharifah Amani) who loves John Woo films and everything Takeshi Kaneshiro, and the obstacles that stand in their relationship.

Taking on the leading roles in the stage version are Joshua Gui and Badrika Bahadur. While the story might be the same, both Gui and Badrika intend to put their own spin to their character.

This is especially important as the musical focuses mainly on Jason and Orked because of budget constraints, which do not allow for a bigger cast to showcase other interesting characters in the film.

Badrika remembers the first time she watched Sepet. She was seven years old, too young to comprehend the serious issues that Yasmin was presenting at that time.

“My mother had encouraged me to watch the film,” the 21-year-old recalls.

When she was older, she saw the film again and that time, she was profoundly affected by the relevance of the issues that Yasmin has shown on film.

“The issues she brought to the film 14 years ago still resonate with the us today,” Badrika adds.

For Gui, he hopes to bring about the same good feelings of those who saw the movie among the audiences who come to see the musical.

The 29-year-old performer says: “The way we execute a story on stage and on screen can never be the same. But what we are hoping to do with the musical is to [evoke those same good feelings] of the film.”

And to do that, the production features 12 original songs and music composed by Shafeeq and Badrish Bahadur.

Musical director Wai Leong explains that both these composers have totally different musical styles. He feels Shafeeq’s music is more Broadway while Badrish is more indie.

These combination of different styles, says Wai Leong, has given an interesting dynamic to the musical.

After Sepet the Musical, Liver&Lung plans to do another musical adaptation, this time, based on Mary Shelley’s famous work Frankenstein but set in the future.

“The story will take place in the year 2029,” reveals Shafeeq, who adds that this horror musical will be presented sometime in November.