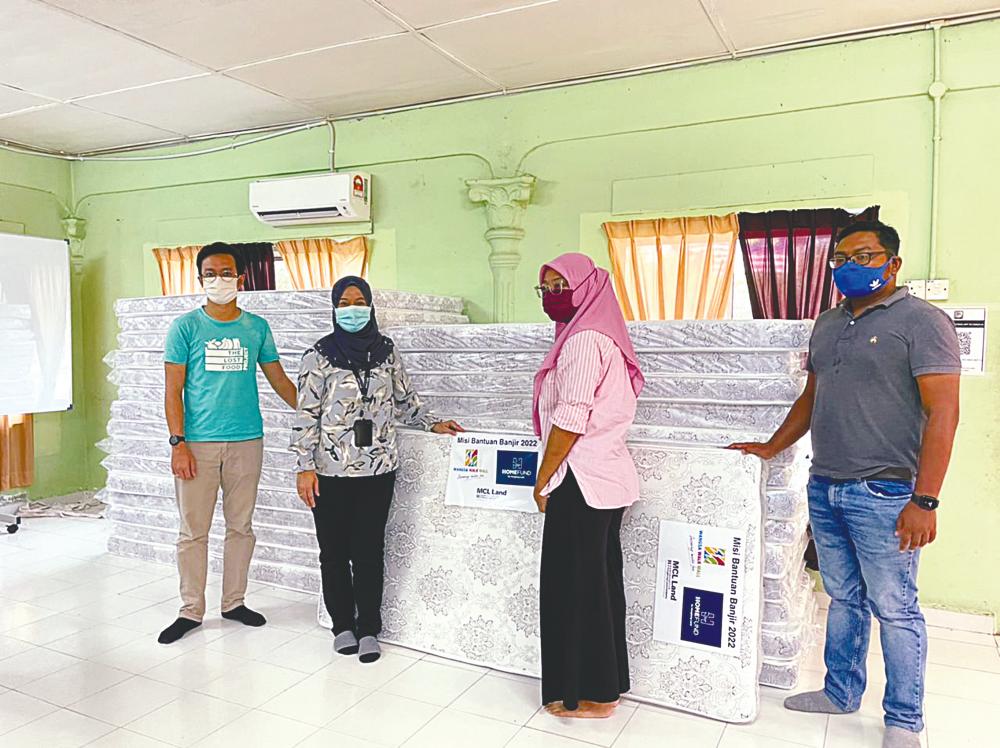 TLFP also looks at other forms of welfare, such as distributing mattresses to families affected by the recent floods.

A LOCAL non-profit organization has helped save surplus food and feed the hungry in Malaysia since the Covid-19 pandemic.

The Lost Food Project (TLFP) has been rescuing food that gets ‘lost’ between being harvesting on the farm and being sold on supermarket racks, and ‘repurposes’ them by donating them to the underprivileged.

Started in 2014, TLFP has rescued tonnes of quality food – otherwise deemed ‘unattractive’ or surplus – from ending up in the landfill and turning them into tasty meals served in soup kitchens.

By saving this surplus food and redistributing it, TLFP is not just saving food from waste, but reducing greenhouse gas emissions as well.

This idea was actually a brainchild of Suzanne Mooney, a former senior broadcast journalist with the BBC, who moved to Malaysia in April 2014.

Initially, she started to distribute nutritious food to several charities using her own car, and eventually, the advocate for sustainable food systems set up the non-profit organisation TLFP – the first sustainable food bank – which has now evolved into a huge food rescue organisation.

Mooney, who is from the United Kingdom, is also a receipient of the Merdeka Award.

The organisation’s general manager Mohd Syazwan Mokhtar, explained to us about the challenges of rescuing lost food and serving them to the right people.

What is lost food, and how do you find it in Malaysia?

“‘Avoidable’ means that the food still can be eaten – but has been thrown away for a variety of reasons at some point in the supply chain.

“Therefore, we can find it just about anywhere, and in our case, we get our supply of lost food from wholesalers, supermarkets, bakeries, suppliers, distributors, and others.

“We work with over 50 food donors that provide this surplus food to us regularly, including Pasar Borong KL, Euro-Atlantic, Nando’s, Nestle, as well as bakeries like Komugi, Lavendar, just to name a few.

“This helps us adapt to new processes to stay efficient – touchless drive-thru food distributions, no- or low-contact operations, pre-packing food boxes, scheduling pick-ups in advance, and collaborating with hundreds of volunteers as well as food delivery companies like Lalamove to deliver meals to homebound beneficiaries.”

How many tonnes of food do you rescue from going to landfills in a month?

Why do you think there is so much excess food that goes to waste in Malaysia?

“There are various reasons for excess food, and mostly, it comes down to business practices, such as oversupply, too much leftover food during the day, which must be thrown out to make way for fresh food or baked items.

“In many cases, perishable foods such as vegetables and fruits are not purchased by customers due to how they look – not fresh enough, crooked, pale, slightly wilted or ugly.

“We even get donations of food, rejected due to labelling issues. TLFP aims to bridge this gap by collecting good quality, surplus food or non-food items that have not expired and redistributing them for free to those in need.”

How do you tackle the food surplus or food waste problem?

“We believe the best way to deal with any issue is by having greater awareness and education. As a society, we might not even realise that we are throwing away so much food. Food waste makes up 45% of total landfill waste, according to SWCorp data.

“If we do not know it’s a problem, then we will not make enough effort to create change. Change can really come in the form of education. Teaching our children the value of food, and how everything is connected. Throwing away a single piece of food, like an egg, is also throwing away resources that are used to produce the egg, like water, land, and habitats that are cleared to make way for farms and factories.

“Then, there are policies. In 2020, we introduced the Food Donors Act, which paved the way for more corporations to join in the cause of donating food to the hungry. It created many opportunities for us to work with more industry players with greater confidence, and it showed with the number of partners increasing threefold, in just over a year. Perhaps, it’s time to look into more initiatives that support the cause, be it waste policies, circular economy programme, tax relief and others.”