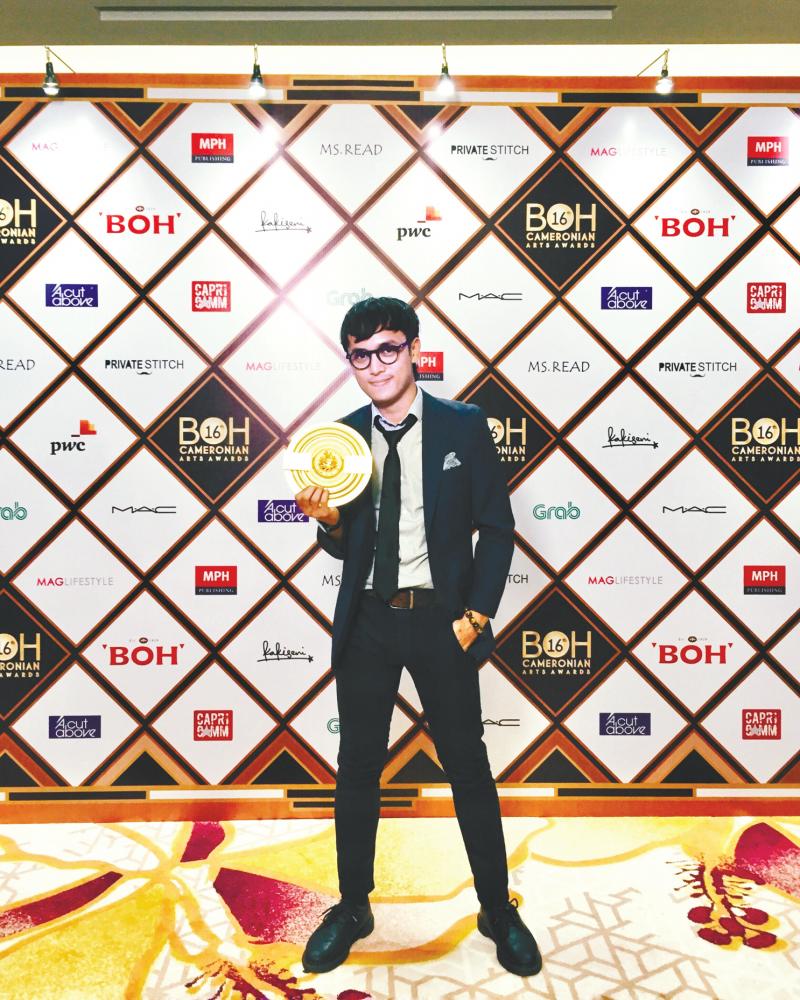 MEGAT ADLI was surprised – and grateful – when he won the award for best actor in a supporting role in the theatre category for his performance in Khairi Anwar’s production of IQ Rock, at the recent 16th Boh Cameronian Arts Awards.

“I have been in the theatre industry for almost eight years and it is nice that someone has noticed my hard work,” says the 28-year-old who hails from Kuala Pilah, Negeri Sembilan, in a recent interview.

The role that got him the award was a character close to his heart.

Shahar is a playful boy who does not pay attention to his studies. But with time, he realises the importance of education in order for him to have a better future, and decides to turn over a new leaf.

Megat admits that he was like Shahar and did not do well in his SPM results.

“I disappointed my parents,” he recalls. “I had to study form six (STPM) while my friends who got good grades went to college and university ... in faraway places.”

He says he felt devastated and totally alone at that time. He even seriously considered quitting his studies to work. But luckily, he changed his mind.

Like his character Shahar, Megat came to realise the importance of education and the need for paper qualifications.

Even now, despite his busy acting schedule, Megat is pursuing his masters in Education in English.

He recalls the tiring time he went through when he was rehearsing for his role in IQ Rock.

He had not only had to juggle his acting with his studies but also travel between Kuala Lumpur and Kuala Pilah daily to check on his father who had fallen ill.

His father is his role model in life, Megat declares. That was why he wanted to be a teacher – just like his father – when he was younger.

“My father does not talk a lot. But he is the most intelligent man I know. He comes from humble beginnings as his dad died when he was just seven years old.”

Megat says his father had to tap rubber early every morning before going to school, just to earn some extra pocket money.

He really admires his dad for never letting his difficult circumstances stop him from pursuing a higher education.

This is one reason why Megat is pursuing his masters degree, as a way to redeem himself and make his parents proud. He eventually wants to teach; in fact, he is teaching public speaking using drama techniques to a class of four- to 10-year-olds.

But for now, his main focus is on establishing himself as an actor.

Megat says his involvement in theatre has helped him a lot. His interest started at age 14 when he joined his school’s English Club where he performed in a few dramas.

“I used to stutter a lot and theatre has helped to reduce that. I was shy and theatre helped me to be less shy. It gave me the confidence to socialise with others. Through theatre, I learnt a lot about myself, especially my weaknesses.”

He admits he still gets nervous on stage. “A tinge of nervousness is good,” he says. “When you are not nervous, you become overconfident.”

He is now looking to break into the film industry. He has been going for auditions for the last three years but it has been difficult.

“People keep telling me I am too short and do not have a large enough following in social media,” he says in frustration, pointing out that Tom Cruise is short but he managed to be an action actor.

“I thought the job of an actor is to get under the skin of the character, not to get social media followers. The industry is too image conscious.”

He says he does not mind if they want good-looking actors for their production as long as these actors can perform and play their characters convincingly.