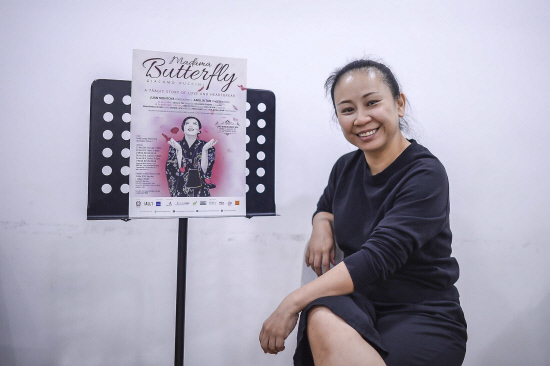 The opera is based on a French novel, Madame Chrysanthéme, by Pierre Loti.

It was later adapted into a one-act play by David Belasco, which premièred in New York in 1900.

The play travelled to London and won Puccini over, who then wrote the music with libretto by Luigi Illica and Giuseppe Giacosa.

The opera premièred in 1904 at La Scala, Milan, and has since been performed all over the world countless times.

Set in Nagasaki, Japan, in 1904, the story tells of US naval officer B.F. Pinkerton, who marries 15-year-old Japanese girl Cio Cio San out of convenience, and leaves her to return to America.

American consul Sharpless, who is also Pinkerton’s confidant, informs her that Pinkerton is coming back but can’t bear to tell her that he is bringing his American wife.

An overjoyed Cio Cio then reveals that she has given birth to a child after Pinkerton left.

But soon her joy turns to sorrow.

Besides directing, Tan is also an acting instructor in the Drama and Visual Department of a local college and has acted and performed here and abroad.

Tan explained that Madama Butterfly will be performed in three acts, and sung in Italian with English and Chinese subtitles.

The opera will also feature a double cast for the two leading roles of Cio Cio and Pinkerton.

“That is the reason of having two sets of actors playing the lead roles on different days so that the singers could have a break and some rest.”

The character of Cio Cio is central to the story, and both Yap and Toh are equal to the task of conveying the range of emotions that Cio Cio goes through.

Yap is an award-winning soprano who was recently awarded the Knight of the Order of the Star of Italy by Ambassador of Italy in Malaysia Cristiano Maggipinto.

Toh is also an award-winning musical theatre performer, notable for her leading role in the Asia Musical Production of Princess Wen Cheng the Musical, which was staged in Kuala Lumpur and toured Taiwan, China and Korea.

In describing the character, Tan said Cio Cio is a kind woman who lets her heart rule her.

“She gives up everything in the name of love,“ the director elaborated, adding that there are so few people today who will do this.

Tan also pointed out another tragic character in the opera – that of Suzuki, Cio Cio’s servant and also her best friend.

“But their relationship is more like sisters than mistress and servant,“ Tan said.

“Suzuki will go to any length to bring smiles to Cio Cio.

“She should have gotten more appreciation.

“But Cio Cio is too busy thinking of her love who is far away.

“It is a lesson for all of us.

“We always forget the people who are next to us and only remember those who are far from us.”

Playing Suzuki is Samantha Chong, who is making her debut with KLCO.

Chong is an award-winning mezzo soprano from Sabah who now resides and performs professionally in Hong Kong.

Others in the cast are Shawn Liew who plays Sharpless, Peter Ong as marriage broker Goro, and Tan Jong Hann as Prince Yamadori.

Conducting the orchestra ensemble of 23 players is renowned Colombian conductor Juan Montoya, who has been the recipient of several scholarships and prizes as a pianist and composer.

He has been the principal conductor at KLCO since 2014. Shoot them dead’: Philippine president Duterte in his own words

5.At least 46 people dead after being found in 18-wheeler in us state of Texas