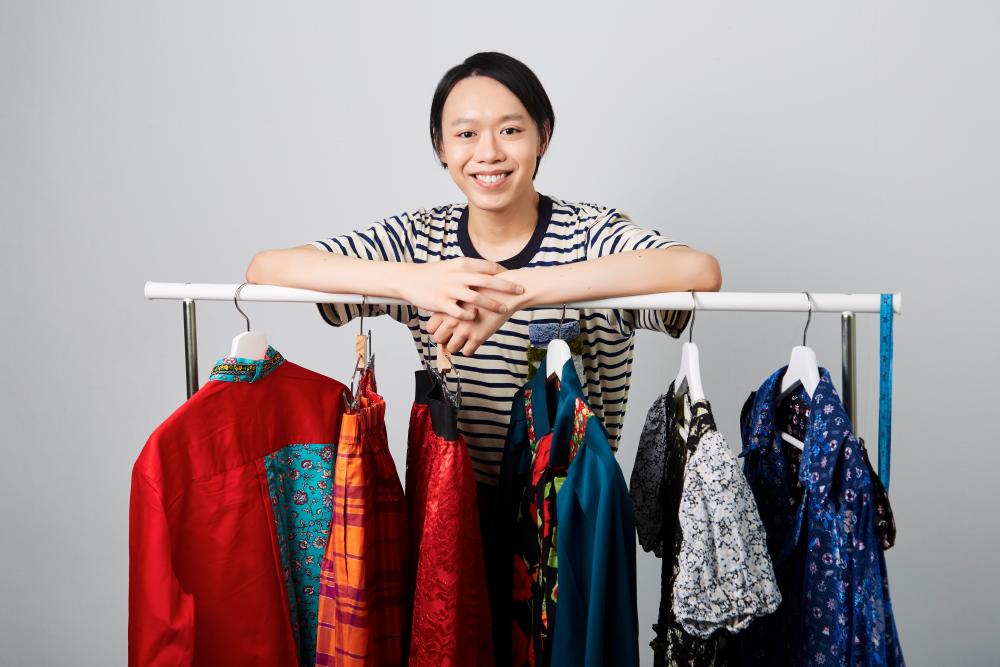 OPULENT designs and tantalising silhouettes that bend and subvert traditional gender binary forms are the hallmark of designer Edie Chung and his fashion label Friesenguys.

He fervently explains: “The desire to intertwine menswear and womenswear reflects greatly in how I dress. It’s something innate and instinctive coming from the gut, and to know that this is what should be done right now – was necessary.”

Chung’s timely resonance unfolds over a series of eventful developments in all manner of occasions and moments, endlessly influencing and provoking his love for fashion beyond make-believe dreamscapes.

His stint in fashion design at the age of 16 was short-lived, before dropping out to pursue his A-levels, and eventually achieving a degree in English Literature & Drama. For the next few years, he would try to dismiss his intrinsic impulses for fashion, in an attempt to bury it in the past and to be a passive observer, as if in a tug-of-war between fantasy and reality.

“Friesenguys is basically my fantasy becoming reality. It wasn’t so much me trying to achieve the fantasy I’ve envisioned and craved, but more accurately, I want my fantasy to be real,” he adds.

Celebrating non-conforming androgyny, Chung conjures the outermost expressions of his innermost feelings through his ability to purposefully disregard conventional and categorised roles constructed by society.

Once-rigid gender norms have been drastically rejected to an extent or considerably subverted for its woefully inadequacy, resulting in progressive ideas of what it means to be gender-fluid and unisex.

Androgyny occupies the space in between masculine and feminine, while exploring how menswear and womenswear overlap or mirror each other’s gender traits. Without being overtly enforced, it’s fluid, natural and for the most part, the essence of ambiguity.

Chung shares: “The notion of masculinity and femininity is ever-changing and mutually interchanging as we break away from the moulded cliches and stereotypes restricted by traditional gender roles.

“Masculinity, however, tends to be quite stereotypical in the way I view it. When I think of menswear, it’s oftentimes very sharp, just like how men project themselves.

“Therefore, [Friesenguys’] debut Spring/Summer 2019 collection was an investigation into the bias image within masculinity; where boys shouldn’t cry and boys don’t wear pink because these characteristics are exclusively feminine.

“On the contrary, when a man is at his most vulnerable, he reveals what I think are masculine qualities; it’s the idea of being comfortable with your weaknesses. By highlighting those soft moments, masculinity becomes vehement, where there is strength in weakness.”

Freisenguys’ non-binary style is free-spirited, filled with unbridled energy and colour, with Chung embracing androgyny to creatively challenge and upend rules with irreverent glee. The frivolity of men dressed as women, and women as men, aren’t portrayed in a banal or obvious way for the sake of being different.

He shares: “When I design, there is in fact a gender in mind. I don’t think you can live in between if you don’t start from one point to another.

“For my first collection, I was very sure that I wanted to make menswear dreamy, punctured with romantic fantasy [and following] a truly androgynous aesthetic.

“I want it to have a fair share of all the equal qualities seen in womenswear, hence, the collection was designed in reverse with the fundamental framework of womenswear translated onto menswear. The second collection for Spring/Summer 2020 was adapted with the principles of menswear reworked onto womenswear.”

Throughout both collections, he customarily showcased his repertoire which has become the brand’s lavish signature; a blend of irresistible romanticism by way of meticulous embroidery and textile manipulation.

He describes: “The garments are less manufactured by machinery and more pragmatically constructed with hand-executed techniques to uphold craftsmanship, so that it may have similar sensibilities as that of couture aesthetic.”

Womenswear, with whirlwind frou-frou dresses and skirts in tulle and organza, intentionally drifts away from the brand’s established androgynous stylings, but are nonetheless exuberant designs injected with a hint of quiet chaos. Patchworks of exaggerated prints clash with one another, and pieces of delicate embroidery adorn the surfaces of print fabric.

Driven by emotional connection and a penchant for contrasts, Chung’s consistent emphasis on florals sets the course for Friesenguys’ lasting narrative.

“Maybe it was an unconscious intention to portray something as fragile and delicate as a flower to be strong and enduring,” he explains.

Friesenguys is arguably one of the most exciting and invigorating local fashion labels on the rise. As we follow his subsequent collection releases ... we are in for a theatrical spectacle. 3.Body of fisherman missing for a week found