Art as a form of escapism 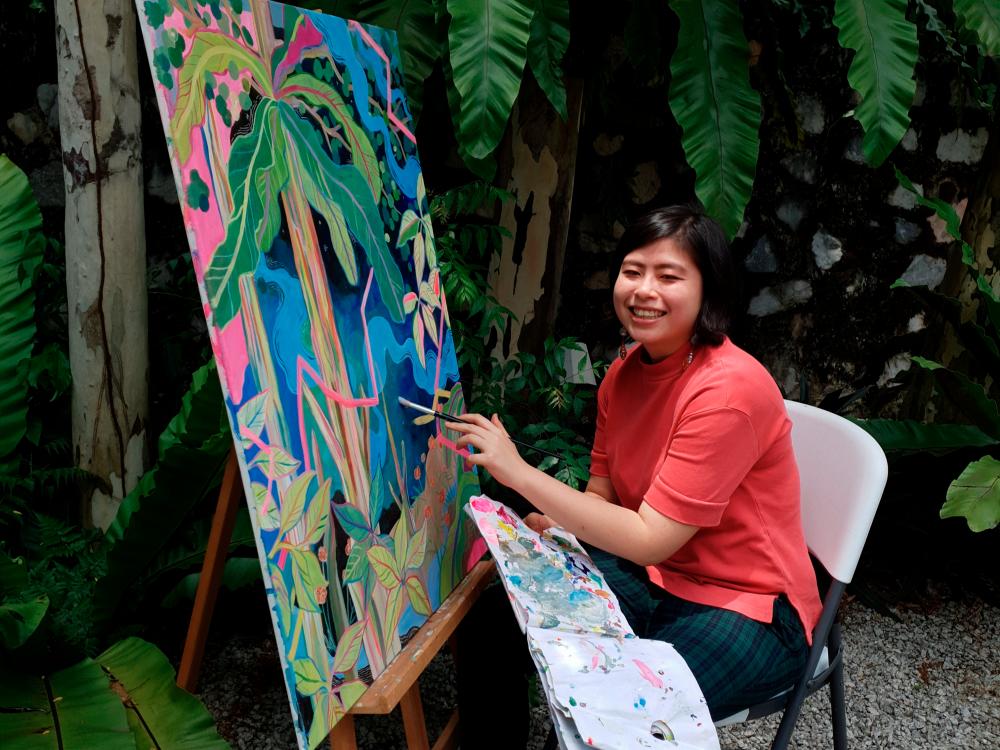 Wong painting in her garden. – COURTESY OF LISA WONG

THESE days, art is something that cannot be excluded from our daily life. For an artist like Lisa Wong Sook Kuan, who graduated with a Bachelor of Fine Arts in Illustration from the California College of the Arts in San Francisco in 2015, art can be found in everything she sees and does.

“I think it’s safe to say that I don’t think art can be avoided. If you live in a house, someone designed it. The books you read, the clothes you wear, and the places you visit, requires some sort of designer or creator,” said the former graphic artist, who quit her job to pursue art.

“Even the cartoons I watched as a child were, in a sense, a form of art, relying heavily upon the skill of the animator,” said the 28-year-old visual artist, who uses acrylic paint on canvas.

“What I love about art is that you can tell so much about a person from the drawings and paintings they produce,” said Wong, adding that an artist’s personality shows through the artwork.

Wong’s fine art depicts her vision (borne out of escapism), inspired by nature. Her contemporary art has been exhibited in the Louvre Museum Carrousel Galleries, Paris, France in 2019, and many other locations such as Spain, Hong Kong, China, U.S.A, and Singapore.

What is the main subject of your artworks?

“The title of the series of my current work is Night Magic. The series explores the possibilities of the supernatural and mystical in the midst of the mundane.

“Much of the inspiration came from my own home, primarily during my walks with my dog in my garden in the nighttime. In my work, the veneer between the physical and magic is thin, and the garden and house come alive at night.

“Goldfish leave the pond and take flight, woodland nymphs cavort around the patio, and the magic begins.

“Currently, I am doing a slight offshoot of that series, focused more on the interior of the home versus the exterior. The idea behind the sub-series is focused on the mind’s internal boudoir – a room that doesn’t exist in reality but consists of several different objects and elements that define the character of the space. As these rooms don’t actually exist, they still follow the theme of magic realism in line with the rest of the series.”

What do you want to convey through your art?

“I want to provide a form of escapism. I have the power as an artist to create a world cemented in reality, but at the same time is disconnected from it. Art is a means to play with our definition of reality.”

How would you describe your art?

“If we’re talking about genre, I would say magic-realist contemporary painting; otherwise, I would describe it as an alternate universe of sorts. Maybe it could even be a peek into the 4th dimension.”

How has your childhood or environment influenced your art?

“The art stems directly from my garden and home. The plainest comparison to the imaginative aspects of my work (the garden coming alive at night), share parallels with Toy Story or Enid Blyton’s Toyland characters coming alive, away from the eyes of their owners.

“As a kid, one of the games I played the most relied heavily on using my imagination and storytelling. Many of the elements in the work itself are objects I own or have a personal connection to.”

Why did you choose to paint birds?

“The birds are part of an older series titled Wild or Warrior, which were paintings inspired by my trips to China and its natural landscape. I chose to paint mainly birds as I find that they have a phoenix-like quality. Their beauty is so vibrant and full of vigour.

“At that point, I found that birds were a means to convey certain qualities or symbols we are drawn to; such as fidelity, luck, or fortune (in Chinese culture) without being too intimate or personal.”

Tell us about an artwork that had a huge impact on you.

“Pablo Picasso’s painting First Communion (1896) was created when he was only 14 years old. He had the skill of an academic master at that age, and it is precisely because he had the skill and knowledge that he could produce pieces like Guernica or Les Demoiselles D’avignon, pieces many deem to be unskilled or naive.

“This may be an unpopular opinion, but I think that some form of art education or learned skill is needed to pursue art. Otherwise, I would still be painting in monochrome to this day.”

What is your future project?

“I am in the midst of planning an online exhibition with two of my artist friends from college, one who currently lives in Sweden and the other who lives in Seattle. The planning of this show would not have become a reality if the Covid-19 pandemic had not shifted many of the exhibitions to the online space. I also plan to paint, paint, and paint some more.”