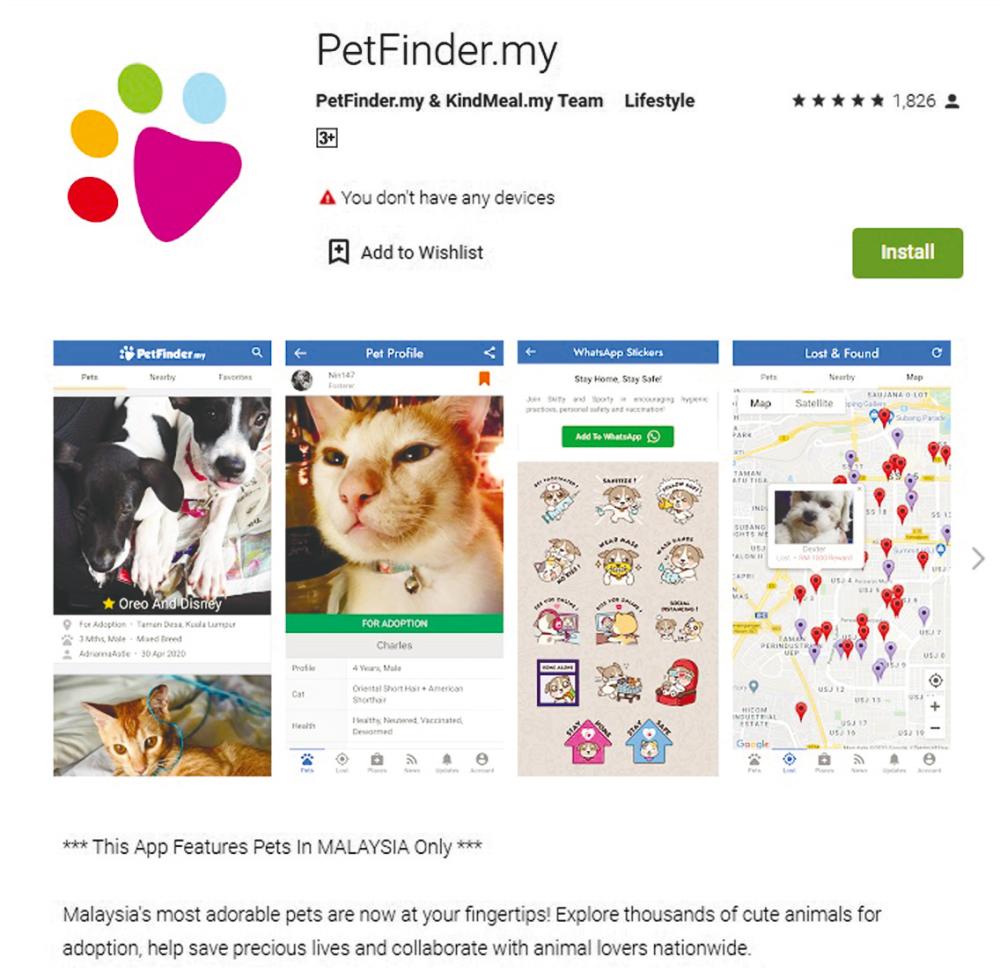 When looking for a pet, do consider adopting from Petfinder Malaysia.

ABOUT a month ago, I adopted two kittens from Petfinder Malaysia. Petfinder is a nonprofit animal rescue service organisation that helps pets to find a forever home and raises awareness about pets.

Petfinder is also known for its Lost & Found pet listings, where people post about their lost pets or pets they find roaming around the street to find their owners.

Upon loading the website, pictures of cute four-legged furries with their gender, age, breed, location, and description can be seen.

I’ve always had pets since I was young, from tortoises to hamsters to cats. After moving to Selangor for my studies, I wasn’t allowed to have pets in my dorm, so the only furries I could pet were stray animals.

After graduating from university and getting my own place, I could finally have pets again. After I found out about Petfinder, I decided to adopt a kitten from them.

My new kitten is named Bunga. She is a three-month-old, black, domestic short-haired stray with a crooked tail, and a loving and adorable personality.

The adoption process was relatively simple. I signed up with Petfinder, chose one of the kittens from the Find A Pet tab, and got the rescuer’s contact info. In the pet profile, the fosterers/rescuers also state whether the pet is vaccinated, dewormed, neutered, as well as the adoption fee.

Most times, the adoption fee is free, but some do charge a small amount to make sure the adopters are serious and to offset any microchip and neutering costs.

After I contacted the rescuer, I went to her place to meet the kitten. Bunga was shy and timid at first, but most kittens tend to be that way when in an unfamiliar place with strangers. After that, I decided that I would adopt her, but first asked the rescuer if I could take her after a week, because the pet stuff I ordered online hadn’t arrived yet.

A week later, I went back to get Bunga and the rescuer told me that she had also caught its other siblings. One was adopted out, and there was another male kitten left.

After I took my new kitten into her new home, she was able to get used to the new place quickly and loved playtime. Since she was a really active kitten, she couldn’t get enough of playing and one time even played for two hours!

I knew I wouldn’t be able to keep up with her for long hours daily as I had a day job. In Petfinder’s Pet Knowledge Library, there are many different articles about how to take care of your pet, with topics such as Transporting or Relocating Your Pet and Things that are Poisonous to Pets.

They also have a Forum tab where pet owners can ask questions about Training & Behavioural Issues and Health, Disease & Diet for pets.

After searching, I realised that I could get another cat for Bunga to play with, as social interactions with another cat can enrich their daily lives. Besides that, pets have a greater chance of getting along when introduced while they are young.

I remembered that she had a brother, so I asked the rescuer if I could go and check out the brother, Bibi. After the rescuer agreed, I brought Bunga in a carrier to their place, and when they saw each other, it was a fast and happy reunion.

Immediately, I knew that Bibi would be the perfect friend for Bunga. The rescuer kindly told me that if I wanted, I could foster Bibi while they look for another adopter for him. Pet fostering is usually temporary, while adoption is typically a more permanent, long-term solution.

When signing up for Petfinder, you can also become a fosterer by updating your Fostering Preferences in your profile.

After I brought Bibi and Bunga home, they got along well. They played with each other, slept on the same bed, and even liked going to the litter box together.

About a month later, the rescuer told me that there was someone who might be interested in Bibi. I immediately felt sad as I’d bonded with Bibi over the past month, and Bunga had enjoyed his company a lot.

I remembered reading an article about bonded pairs, and it describes two pets that have a very close relationship and are inseparable. Usually, when bonded pairs get separated, they might also get depressed.

Clearly, the two had bonded and I knew it wouldn’t be right to separate them. In the end, I told the rescuer that I had decided to also adopt Bibi, and that was how I ended up with two kittens from Petfinder.

Since the Covid-19 situation has severely impacted nationwide shelters and rescuers, Royal Canin has collaborated with PetFinder.my and offered free Starter Packs for adopters to encourage adoptions. Since it was my first time adopting via Petfinder, I was also able to receive a free bag of pet food!

Even if you can’t adopt a pet, for now, Petfinder also has a tab for Medical Sponsorship & Emergency Rescue Fund where you can contribute donations for other animals. In addition to that, they also have a tab called Classifieds, which is a one-stop destination for pet products, services and shops.

PetFinder also has a You Must Know tab that has helpful information on Stray Rescue, as well as Cat and Dog Care. Since strays are prevalent in Malaysia, there are many downsides to unneutered strays, including an increased chance of getting diseases, shortened lifespan, and animal abuse. By adopting a pet instead of buying from pet mills, you can help keep a stray off the streets.

However, users should also be aware of scams that Petfinder also warns about. To be on the safe side, Petfinder urges users to only make payments after personally meeting up with the owner and pet.

As long as you follow their guidelines, adopting a pet from Petfinder can be a good experience, where you get a new furry friend that brings joy to your life.