From fashion to art 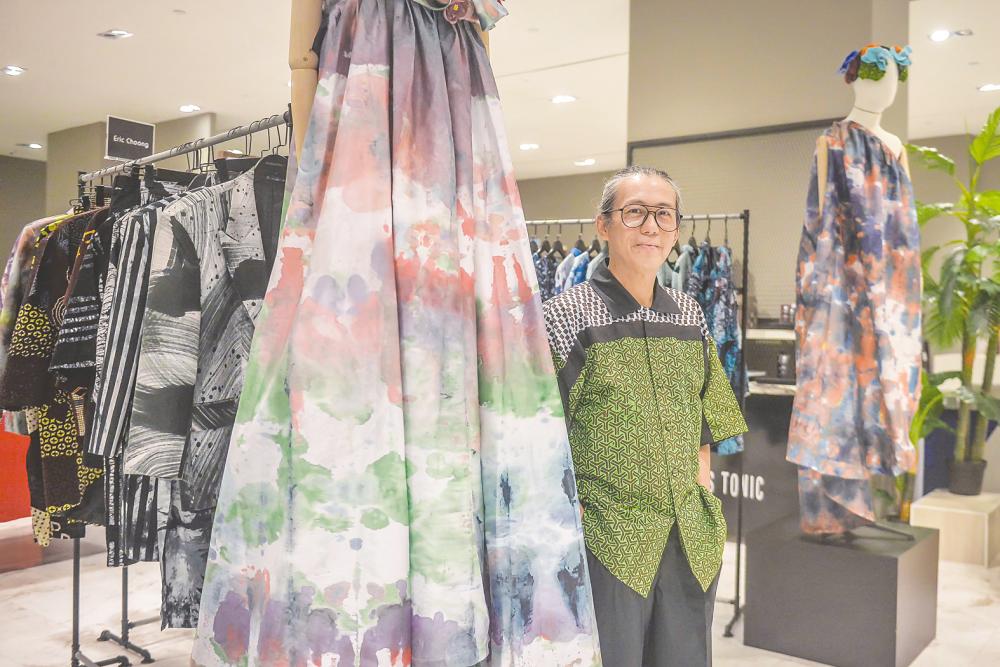 Eric Choong with his colourful and dramatic creations. – ADIB RAWI/THESUN

During the CollabStore event at Shoppes at Four Seasons Place which was held in Kuala Lumpur on Jan 6, Choong showcased his unique art-to-wear collection inspired by traditional Japanese kimono silhouettes, using batik fabric which he created.

This collection comprises striking dresses, outerwear, pants, and blouses for women and men. The eye-catching pieces can easily be mixed-and-matched with other pieces.

One of the collection’s most appealing pieces is an A-line dress that could easily be a show-stopper in Choong’s fashion show. The eye-catching dress has five colours and was created using the tie-dye technique, which took him almost a week to complete.

What distinguishes the collection is that, in addition to batik designs, he included some of his own creative artwork prints. Previously, the couture designer crafted premium batik under his fashion label.

He has even made exclusive batik print designs for the late Datin Seri Endon Mahmood. About 15 years ago, Datin Seri Endon launched a campaign to bring back batik, and urged local designers to use the prints in their designer wear.

Among the designers were Choong, who fell in love with batik. He describes Datin Seri Endon as a ‘mentor’ who often encouraged him.

His batik designs are bold, creative, and one-of-a-kind pieces, as he created them by applying different kinds of techniques which he has mastered over the years, including tie-dye, hand dye, block prints, and free flow hand drawing, as well as techniques he developed on his own.

“I combine my personal techniques with [traditional] batik techniques,” revealed Choong, who comes up with his own patterns, motifs, prints, and designs.

Just seven years ago, Choong, who was sought after for made-to-measure wedding and evening gowns, semi-retired from the fashion world which he had been a part of for 30 years.

Currently, Choong is a fashion college lecturer, which gave him time to delve deeply into the art of painting. He explained that he also considered batik to be an art form.

In fact, the designer has loved to draw since he was a child, but his passion for art had taken a backseat for most of his life, until 2020.

That year, it was revived after an art curator friend who had opened an art gallery in Shanghai, China, encouraged him to rekindle his love for art. Choong began painting again, and the exhibition titled The Art of Eric Choong was born.

“I used my knowledge of fashion and batik techniques to create art on canvas. In painting, I use elements, graphics, and some of the ingredients from batik techniques like tie dye, hand dye,” he revealed.

“I combine fashion with art.”

Eric showed some of his art pieces that used tie-dye techniques, and acrylic paint on top. “I use mixed media in my works of art. Techniques and knowledge that I learned from batik-making were transported onto canvas,” Choong said.

His foundation was in fashion design, and colour was one of his skills. “I use colour when I do art. I use my knowledge of colours and plant dyes from batik painting and its techniques in my art pieces.”

The plant dyes used in his paintings and fabrics are handmade. During the lockdown, he began to experiment with natural and eco-friendly dyes on fabric.

“I would go to the market and buy vegetables, roses, and fruit, then boil them to bring out their natural colours,” he explained. “Then, I turned them into colour pigments and applied the colour to art pieces.”

“I also use coffee and tea,” added Choong, whose favourite colours are indigo, black, and white. The hand-painted artworks are then transformed into digital prints on the fabric, which is turned into garments.

However, not all of the paintings are transformed into fabric. Some are selected to be turned into digital art. At the same time, Choong also creates entirely different designs for fabric.

Speaking about his new collections, he said: “I hope my batik collection can inspire more young people to wear it every day.”

He believes that people have the incorrect perception that batik clothing is only worn by the older generation to formal functions, and that batik is not “in trend” or fashionable for the younger generation.

“I wish that my batik collections would bring back the trend,” he said. “I hope more people wear batik, and batik should be a must-have piece in everybody’s wardrobe or closet.”

Choong’s artwork and ready-to-wear designs can be found at Collabstore, Level 2, Shoppes at Four Seasons Place, which also houses his latest batik collections.