Grab rider turns out to have aeroplane engineering degree 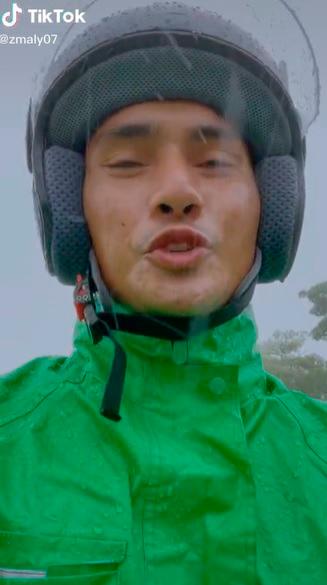 Grab riders often not only battle against other road users, but also the dangers of Malaysian weather during their jobs. – TIKTOK/@zmaly07

SOCIAL media, despite being a useful tool and platform, it is often misused by so-called “keyboard warriors”, and in Malaysia, these people are known for kecam-ing (calling others out). In the greater world, it is also known as cancel culture.

Often times, the people who are kecam-ed are lowlifes, sexual predators, misogynists, or just people who are detrimental to society in general. But sometimes, it is targeted toward innocent people.

Most recently, a Grab rider posted a video on TikTok under the username @zmaly07, with the caption: “Things will be hard at first, but the easy parts will come later.

The user recorded himself in riding in the rain, with the signature green overall Grab riders are known for, as he says: “It’s not easy to have things easy. So during hard times, we have to be patient first”.

Malaysian TikTok users being their usual annoying selves, proceeded to kecam the hardworking rider, with the comment at the top (comments are sorted by engagement) saying: “That’s what happens. When people were studying before, you were playing. Now that times are hard, you’re fishing for sympathy”.

As enraging as the comment was, the Grab rider responded to the comment with another video, in which he explained: “I studied well. But I haven’t been blessed with a permanent job. Pray for me, okay?”

Services such as Grab have become important lifelines for those who found themselves without jobs, particularly those most hit by the pandemic two years ago, and for the Grab rider, the job has been helping him sustain himself.

During these hard times, it is best to not pass judgement on others, whether they’re Grab riders or anyone else, because you don’t know their background or the difficulties they’re personally going through. 4.Inquest on baby Syifa’s death to begin on Sept 22