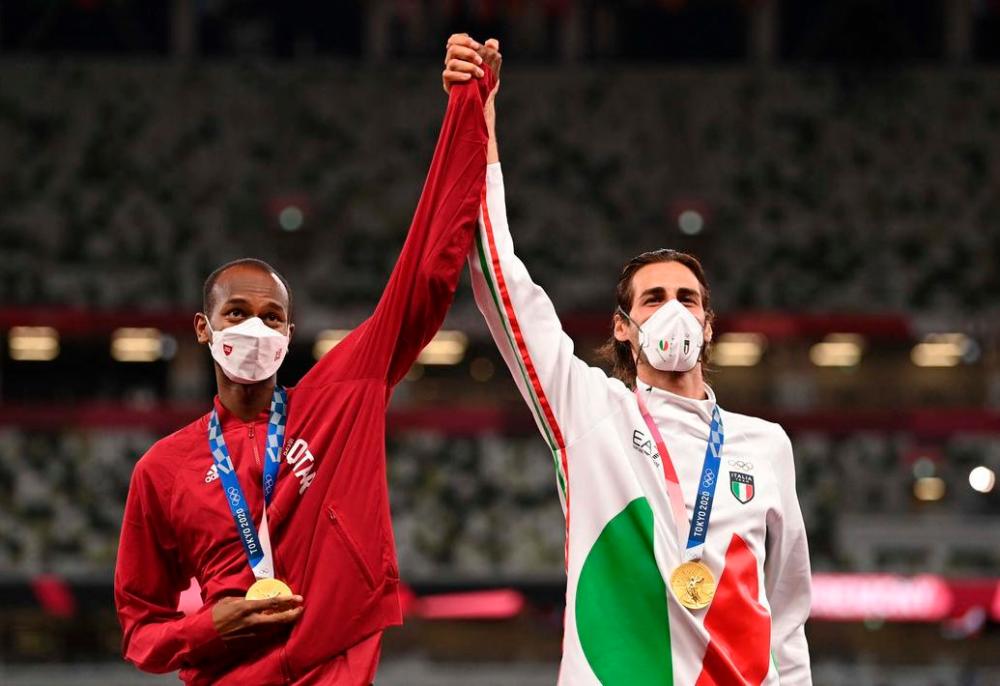 Qatar’s Mutaz Essa Barshim and Italy’s Gianmarco Tamberi sharing the top spot on the podium for the men’s high jump at the 2020 Tokyo Olympic Games. – AFP

Mutaz Essa Barshim, 30, from Qatar and Gianmarco Tamberi, 29, from Italy made headlines all across the world when they agreed to share their gold medal for the men’s high jump on Sunday at the 2020 Tokyo Olympics.

The two Olympians each executed six consecutive jumps of 2.37m during the competition, prompting the judges to ask if they wanted to try for a tie-breaker to determine their medal placements.

Instead, Barshim asked if they could both have gold medals. The judges agreed, leading to a huge celebration by both men and their respective camps.

What made the shared gold medal achievement between Barshim and Tamberi all the more sweet was that it came after years of struggle by both athletes.

Tamberi suffered a nearly career-ending broken ankle that forced him out of the 2016 Rio Games. To motivate himself, Tamberi brought the cast which he wore during his recovery to the stadium.

Barshim and Tamberi have also been long-time friends, having trained and competed against each other for many years, and the fact that both of them were able to share their greatest Olympic moment together only added to the joy.

After climbing on to the podium together, Barshim and Tamberi presented the gold medals to each other amid more hugs, and switched places to face their flags when each national anthem was played.

Barshim later told reporters: “It is amazing, man. To share it with Marco is an amazing feeling. It is a great feeling. I'm really happy.”

Tamberi openly shed tears over his win. “I was told in 2016 just before Rio there was a risk I wouldn't be able to compete anymore,” he said. “It's been a long journey.”