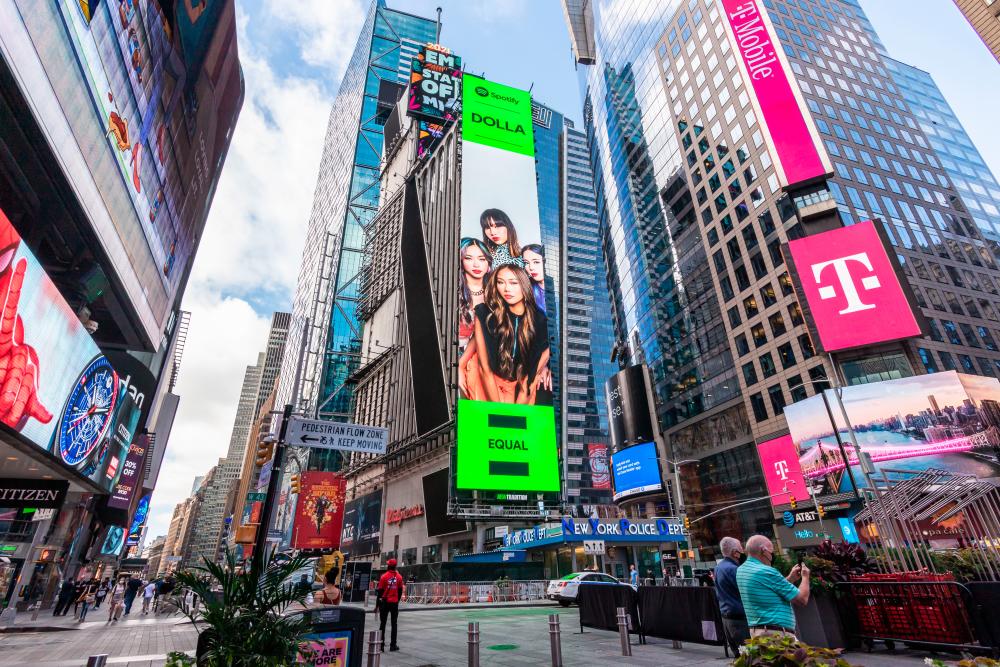 Dolla’s appearance on the digital billboard came about as a representative of Malaysian singers in Spotify’s EQUAL campaign. EQUAL is a global programme by Spotify aiming to foster equity for women in audio and nurturing equity by highlighting female artists around the world.

There are currently 35 local EQUAL playlists covering artists from over 50 countries with Dolla being on the cover as a representative from EQUAL Malaysia and Singapore’s playlists.

Members of Dolla namely Sabronzo, Tabby, Syasya and Angel were delighted upon learning the news.

“Words just cannot express how we feel right now. This is such a huge honour for a newly formed vocal group like us and we hope we can continue to live up to the expectations of our fans,” said Sabronzo, speaking on behalf of her group.

Dolla was formed in 2019 and started a ripple in the local music industry with their daring image and bold showmanship. Armed with slick dance moves and sensational fashion sense, Dolla garnered more fans with their contemporary brand of music.

After hitting the local charts with their debut single include ‘Dolla Makes You Wanna’, they went on to release a second single ‘Impikan’, and the English version, ‘Watch Me Glow’, in October 2020.

‘Impikan’ reached a million views on Youtube in less than two weeks and gained widespread media attention locally and internationally, as well as within the SEA region and Korea.

They also took part in the Phillipines’ ABS-CBN collaboration track, HEAL, an all-female Southeast Asia collaboration song with 13 other artists across the region.

In 2021, Dolla also released ‘Raya Raya Raya’, a festive song in conjunction with the Hari Raya Aidilfitri celebrations. The track currently has over 4 million views on YouTube.

Axis-REIT to acquire logistic warehouse facility in Johor for RM32m

1.MACC arrests GLC executive, two others for misuse of power

4.All parties must comply with campaign restrictions for sake of public safety — Melaka CM