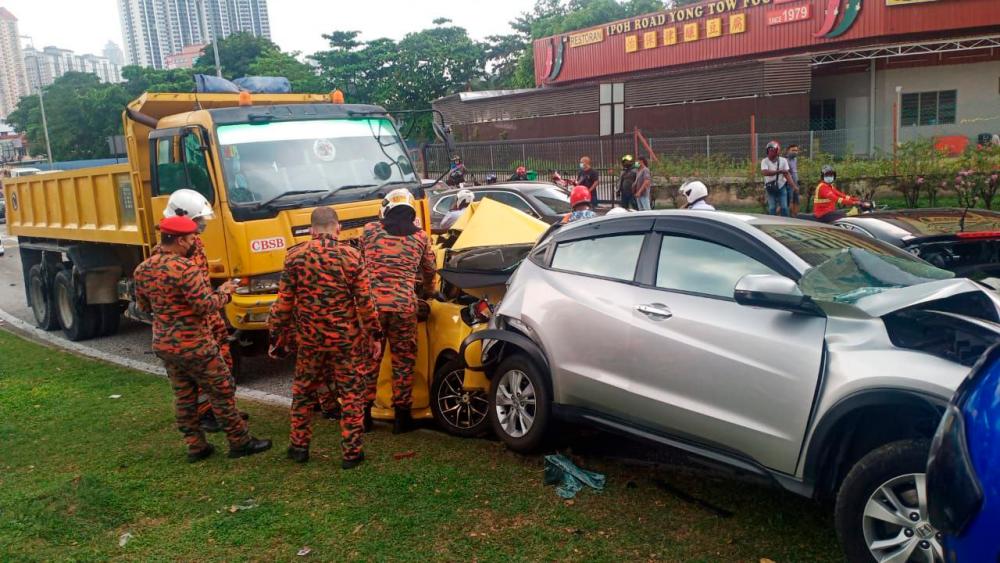 CHAOS reigned in the city yesterday when a 25-year-old lorry driver, high on meth, crashed his vehicle into a row of cars waiting at a red light along Jalan Ipoh in Sentul, causing damages to seven other vehicles.

Videos of the 2.30pm incident, which was captured on dashcams and mobile phones, went viral on social media. A yellow Myvi which was directly in front of the lorry was completely crushed.

Miraculously, no lives were lost during the incident. The 45-year-old Myvi driver, later identified on social media as Abang Nik, was able to crawl out of the wreck on his own.

He was later brought to Hospital Kuala Lumpur for treatment and is reported to be in stable condition.

Kuala Lumpur Traffic Investigation and Enforcement Department chief, Assistant Commissioner Sarifudin Mohd Salleh later said that the lorry driver was subsequently taken to the Dang Wangi Police headquarters for a urine test and was found positive for methamphetamine and amphetamine.

“Investigation has been classified under Section 44(1A) of the Road Transport Act 1987,” he added.

Netizens were horrified by the accident, but were full of praise for the actions of emergency crews and the motorists who attempted to help the victims afterwards.

That Jalan Ipoh road tragedy was just...omg. I can't even express it in words as it was just like any ordinary day, heavy traffic.
The Guardian Angels of all those victims were definitely with them 🙏 I really do hope that justice will be served! #Malaysia

The Malaysian spirit out of social media world....Abang and Anneh coming together, pushing a yellow lorry that completely crushed a Myvi in today's crazy Jalan Ipoh accident.

The Malaysia I know minus the man made racism noise on social media.💛💛💛 pic.twitter.com/eM6iIlyC6U

Police have requested for members of the public who have any further information regarding the accident to contact the Jalan Tun HS Lee Traffic Police Station at 03-20719999 or the Kuala Lumpur JSPT Hotline at 03-20260267/69 or any neighbouring police station.