Malaysian woman is inspired to learn swimming thanks to her cat 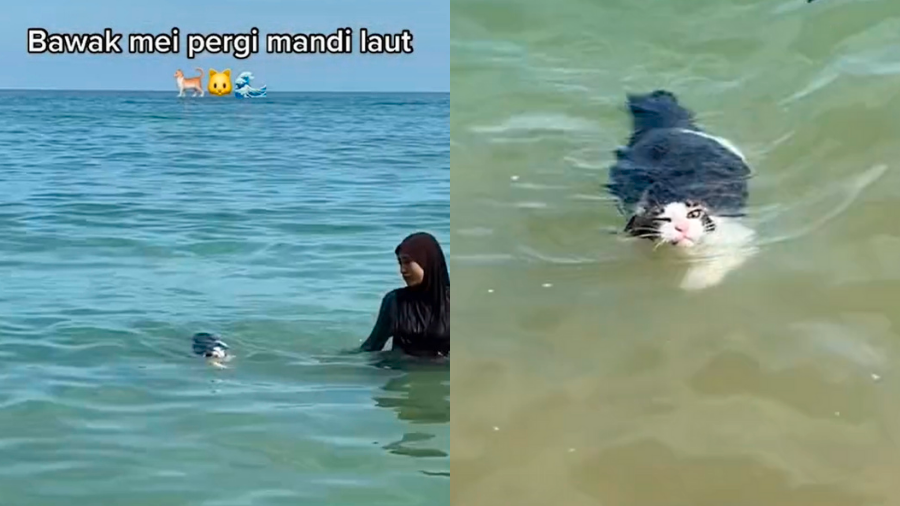 Cats are known to behave aversively towards water so imagine this cat owner’s surprise when her cat swam with her!

In a video shared on Tiktok by @alyaaamran, netizens were delighted to see the cat wading in the sea without any hint of fear.

“Mei is actually a stray cat. I met him when he was just born, on the roadside near the kampong area more than a year ago,” she told mStar.

Apparently, Mei has never been afraid of water. Whenever Siti goes for a shower, he joins her too in the bathroom.

However, she didn’t’ know her cat can swim. Last December, she brought Mei to the beach with her. To her surprise, her cat managed to float and swim in the ankle-deep water with ease.

The Tiktok video that went viral showed them swimming in Port Dickson and it was their second time in the sea together. This time she took Mei into waist deep waters to swim and frolic around.

Siti couldn’t bring her cat further into the sea because she’s not great at swimming. “I’m not good at swimming. When I go to the beach, I only swim in waist deep water. I always bring a swimming float to the beach,” she said.

When they swim in the sea together, she keeps a close eye on Mei too. “I don’t want him to swim for too long because I don’t know how far his capabilities are and I want him to be safe,” she shared.