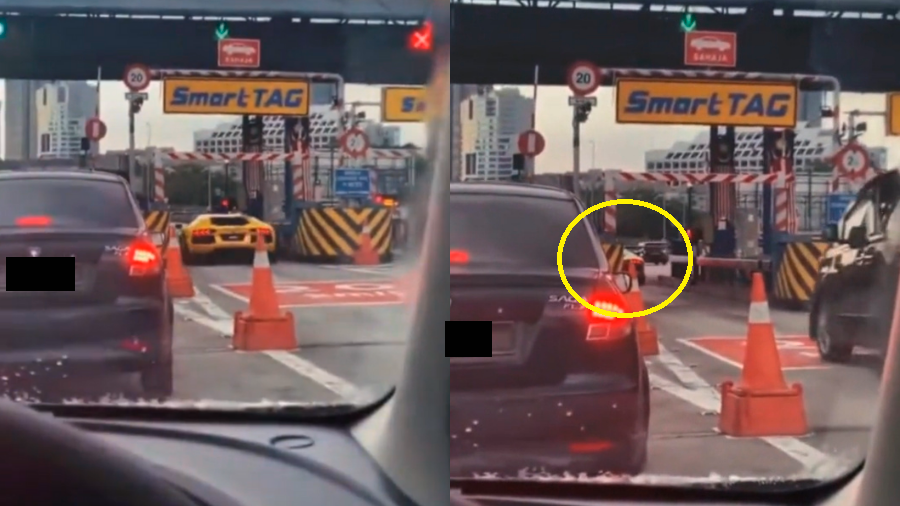 Finally, there’s something a Myvi can’t do! Recently, a viral video by Kenny@X-ONE showed a driver of a supercar who managed to avoid paying the toll.

In the video, a yellow Lamborghini Aventador was seen slowly creeping under the SmartTag toll boom gate before successfully speeding away.

The toll light didn’t even turn green, something many netizens hold as proof that the driver never intended to pay the toll at all.

No need to pay toll fees? 😳 ##like ##followme ##lamborghini ##shimalganu

Netizens were clearly livid and ashamed for the driver.

“No wonder the price of this car is worth more than a million because it comes with a package where the owner doesn’t have to pay for tolls for life,” a user wrote.

“Can buy an expensive car but cannot pay the toll. Be shameful a bit. I drive a Perodua Kancil but I still pay the toll lah,” another user commented.

“Our bus can’t go under the [gate],” @myrapidkl commented on Tiktok.

“Imagine using lambo but refuse to pay RM2.50,” another Tiktok user wrote with a clown emoji at the end.

According to Carlist, the driver of the Aventador probably couldn’t afford to pay the toll because most of the money went into buying the car, paying the annual road tax, insurance premium and not to mention, the petrol.

Depending on the year and specification of the car, the Aventador can be bought between RM1.5 million to RM3.5 million. The annual road tax is about RM18k and the insurance premium is in the five-figure range.

According to The Rakyat Post, there were people defending the Lambo driver and said it was normal for “lowered” sportscars to pay toll fees without alerting the toll gate sensors.

This was disputed by the person who posted the video. According to Kenny@X-ONE, the toll booth display screen had shown that the yellow Lambo had low balance in its Touch n Go account.

When this happens, normally the driver is forced to leave the car at the toll booth and walk to the nearest top-up counter to reload their account or reverse their vehicle and drive to the nearest reload or cash lane.

To drive the point home, Kenny@X-ONE recorded himself driving through the toll using the SmartTag as a comparison.

This recent incident truly brings home the message: Just because you can buy it, it doesn’t mean you can afford it.