Police are looking for dangerous cyclist tailgating a lorry trailer 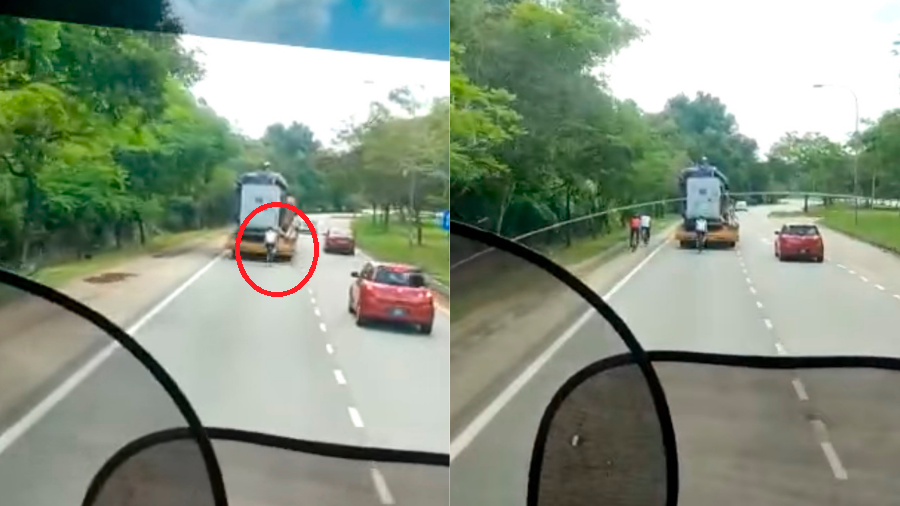 Police in Kuantan are looking for a cyclist who rode dangerously close behind a lorry trailer on September 17.

In a video believed to be taken along Jalan Kuantan-Gambang, a lorry driver recorded a cyclist riding close to a lorry trailer in front of him.

The 2-minute video showed the lorry trailer speeding up, perhaps to put distance between the lorry and the cyclist. However, the cyclist only pedalled faster to keep up. According to Wapcar, this type of cycling is known as drafting.

The other cyclists on the road kept to side lanes and observed road safety precautions.

The lorry driver recording the incident could be heard telling off the cyclist for his dangerous actions.

Fortunately, the lorry trailer in front did not need to suddenly jam the brakes. In a worst case scenario, the cyclist will be sandwiched in between two large lorries in an accident.

According to Kuantan district deputy police chief, Superintendent Mohammed Rizal Kamaruddin, the cyclist is in violation of Section 42 and Section 54 of the Road Transport Act 1987.

If convicted, the cyclist faces a fine of RM 300 for the first offence or RM 1,000 for repeated offence or even face jail time.