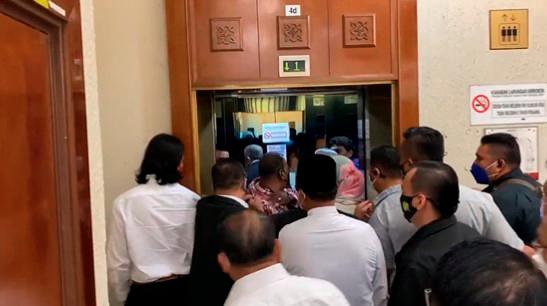 A screenshot from the video showing the man (centre) being pulled away from the lift. – Twitter/@MelGohCNA

Ahmad Zahid was at court that day in order to find out whether he would have to enter his defence on 47 corruption charges involving millions of ringgit from his charity foundation Yayasan Akalbudi (YAB).

As Ahmad Zahid and his party of family and supporters made their way into a lift to take them to the courtroom, one of his bodyguards was seen violently yanking back a man wearing a red-checkered shirt in order to make way for the VIP and his entourage.

The sudden action appeared to shock the man, who seemed to have been choked by his own collar when the bodyguard pulled at his shirt.

Netizens were angered by the video, pointing out that the man had already been waiting his turn at the lift before Ahmad Zahid had arrived.

“Wow check out the guy who gets yanked by the collar at 0:23. Who’s the thug that did it? Is that not assault/criminal force? @malaysianbar is that a Section 352?,“ Twitter user Nicholas Gomez replied under the video.

Section 352 states that whoever assaults or uses criminal force for a reason other than grave and sudden provocation, shall be punished with imprisonment for up to three months, get fined up to one thousand ringgit or receive both.

Thousands of similarly enraged comments voice their opinions in the thread as well, with many pointing out the sheer disregard for SOPs. Most noticeable of all was the amount of people walking closely together and trying to cramp together into one lift. Current SOPs only permit a maximum of five individuals in a lift.

Dissatisfied netizens sarcastically reminded each other that SOPs only apply to “ordinary citizens” and pointed out the double standards for those in power.

Another Twitter user stated her frustration at seeing how the citizen was treated just to make way for someone more important. The thousands of retweets she received indicated unanimous agreement of her statement.