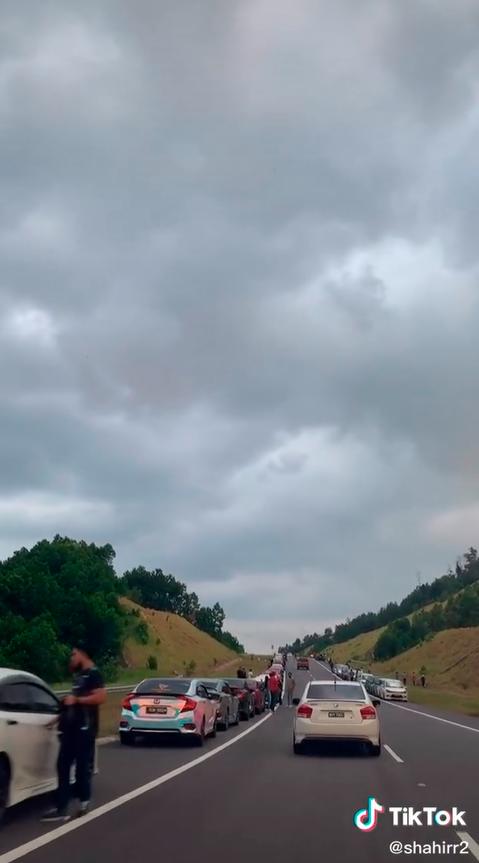 A screenshot from the viral video showing the drivers crowding the emergency lane. – TikTok

THE new Teming-Pantai Highway, which was opened last year, went viral for its scenic views that many have likened to New Zealand. Despite it being relative quiet and sparse with vehicles, the route becomes rather busy on the weekends.

It was something one TikTok user found out on Sunday.

Currently sitting at over 1.4 million views, user @shahirr2’s video showed him slowly driving on the highway, while there was an entire convoy of Honda Civic FC cars parked on both sides of the highway’s emergency lanes.

While the cars occupied the emergency lanes, people who were most likely the drivers could be seen huddled in groups along the lanes.

Some were even standing on the actual driving lanes, putting themselves in danger.

“That’s the emergency lane. Not for parking. Troubling other cars who have to slow down as they’re passing by,” said one of the comments on the video.

Another comment pointed how the people were standing there just to hang out, and how other cars had to evade them, despite how the road is meant for cars to travel and not for people to stand around for a chat.

The criticism appeared to draw the attention of some of the participants, who seemed to be proud of their selfish actions.

The account FC Malaysia on TikTok went so far as to leave a comment, thanking the original poster for helping to showcase the group’s stunt.