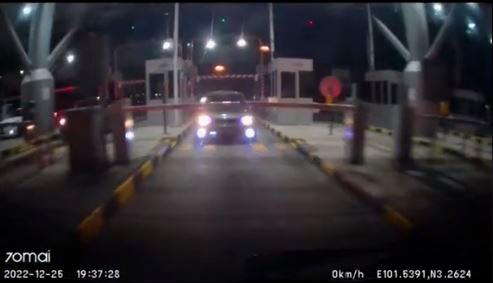 THE FIRST month of 2023 has not even ended yet and irresponsible drivers have started their antics skipping toll payments to save a quick buck and being a menace to other vehicles who rightfully paid their toll fares.

A young wife posted on her TikTok account @fizazzul showing a selfish driver trying to tailgate her car at a toll stop.

In the video, although not shown, Fiza’s husband was behind the wheel and knew that the driver behind them meant to skip paying the toll fare and decided to take matters into his own hands.

“I have to go slow here. I can see what he is trying to do here,” her husband said.

Her husband took his time and went as slow as he could so the other car would not get a free pass. The tailgating driver was not pleased and even honked at her husband and yelled at him. Fiza’s husband even called out the toll booth staff to alert them of the situation but no one came out.

“He doesn’t want to pay the toll! Where is the guard?!” Fiza’s husband yelled, attempting to alert the toll booth staff.

As soon as her husband was done alerting toll booth staff, the driver behind seemed to have lost his cool and even opened the door but Fiza’s husband managed to drive away quickly, leaving the entitled driver behind with the boom gates closed.

World of Buzz reported that Fiza said that the incident took place at the Lagong toll in Sungai Buloh last December.

“He did not manage to catch up. He was stuck at the toll booth,” Fiza said.

The viral video earned over 134,000 views and Malaysians were impressed at her husband’s move in stopping the tailgating situation from happening, expressing major satisfaction at the sight of the driver being put in his place.

“Thank you for making this. I feel satisfied looking at this video,” a netizen said.

“Thank you for posting this here. Let this be a lesson to those who do this sort of thing,” a netizen added.

“Legend says the tailgating driver is still there till today,” a netizen said jokingly.