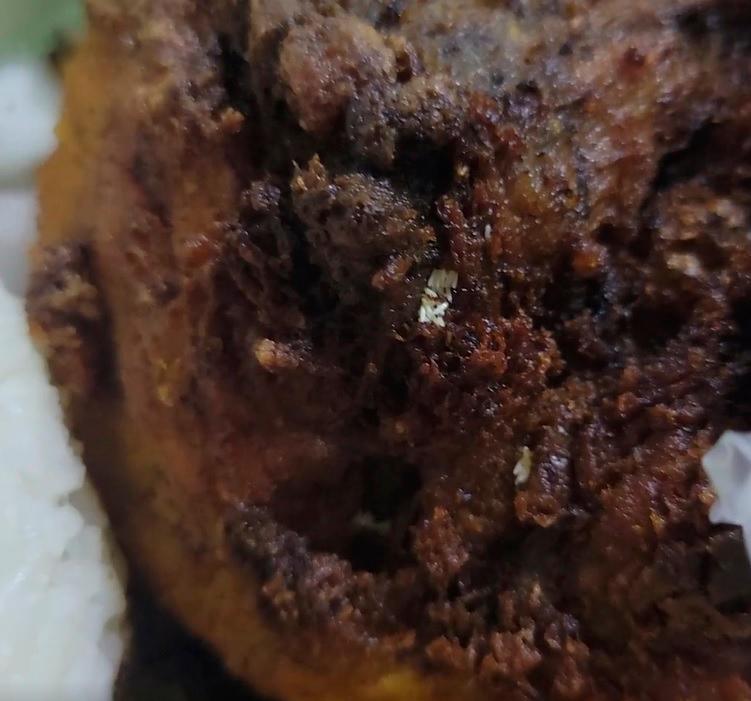 TIMES are tough, and earning a living can be quite hard for many Malaysians.

So, the last thing anyone wants is to spend their hard-earned money on food they expect to keep them full for the rest of the day, only to find the food has been tainted.

In a video that has gone viral on Reddit, a Malaysian netizen bought a packet of ayam penyet, allegedly from a hypermarket in Subang Jaya on March 13, only to later realise that the takeaway dish came with more than the standard chicken, rice, kari, sambal and cucumbers.

There were fly eggs nestled on the chicken.

For added horror, there were three spots on the chicken that had fly eggs on it, which means at least three flies illegally gave birth on the fried chicken.

One of the comments on Reddit pointed out that flies don’t lay eggs on fresh, bacteria-free food, as the flying vermin only look for signs of rot before laying eggs.

“Look like this chicken already goes into multiple frying already,” the same user pointed out.

Other users recounted consuming food tainted that had fly eggs they initially didn’t notice, which led to excruciating food poisoning that lasted for almost a week.

Take this incident as a lesson to be extra vigilant when buying food, especially those that aren’t prepared fresh in front of you.

A quick Google search reveals that it takes a single fly seconds to lay anywhere from 75 to 150 eggs in one batch. It’s the definition of “blink and you’ll miss it”.

Additionally, as fly eggs look similar to normal grains of rice, be watchful for anything out of the ordinary, like how these “grains” tend to be much smaller than rice, and are oddly clumped together.

Protein is good, especially if there are extra pieces of chicken in your dish that you didn’t pay for, but this isn’t the kind of extra protein you want on your food. 4.Zelensky says does not believe Putin will use nuclear arms