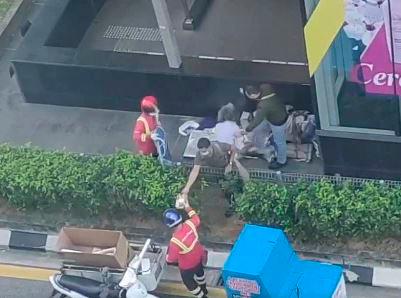 A screenshot from the viral video. – Twitter/@jnmalaysia

RECENTLY, a video of a homeless man being kicked went viral on social media, and netizens were outraged over the heartless attack..

The video was posted on Twitter by Jabatan Netizen Malaysia (Ajnmalaysia). According to the caption of the video, the incident took place somewhere in Bukit Bintang.

In the 30-second clip, four men who appear to be council workers can be seen cleaning up the area where the homeless man had put his belongings. While the homeless man, who looked to be elderly, was trying to save his things from being taken away, one of the men who was dressed in green pushed and kicked the homeless man until he fell down.

The other three workers ignored the whole situation and just watched the homeless man getting mistreated.

The viral video caught netizens’ attention, and they roundly condemned the man’s action as “rude”, and called for authorities to investigate the issue and make sure the attacker was punished for the assault.

An investigation into the incident has been opened, and according to the Dang Wangi District Police Chief Assistant Commissioner Noor Delhan Yahaya, the police are looking for the man in the video.

“We request the public to step forward and share information about the incident to aid our investigation,” he said.

No matter who a person is, they should not be treated in such way. Hopefully, the culprit gets caught soon.

What do you think of this whole situation?