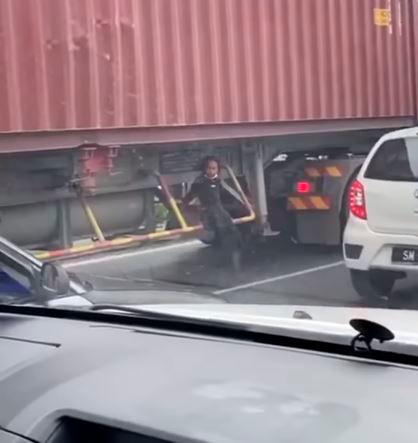 A video went viral recently showing a young child who was sitting on the rails of a container truck that was waiting at a traffic stop.

The nerve-wracking video showed the child, suspected to be a beggar, sitting with her legs hanging in mid-air over the ground. Netizens felt that if the truck were to suddenly move or speed up, the child risked falling under its wheels.

One netizen urged the government to take strong action against beggars who often hang around traffic lights, adding that this would damage Lahad Datu’s reputation as a popular tourist destination.

Another wrote: “This issue needs to be taken seriously, if there is an accident, the driver will go to jail.”

Another netizen said the public should stop giving money to these beggars as they were risking their own safety, as well as that of drivers.