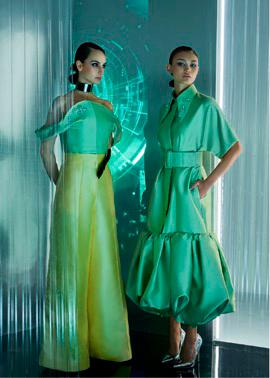 KHOON HOOI is a name, which needs no introduction in the local fashion industry. The designer has spent the last 22 years in the business specializing in bespoke tailoring for his fashionable loyal clients in Malaysia.

This season, Khoon Hooi embarks on space travel with a sense of optimism and escapism from the bleak pandemic. Alluding to the futuristic glamour of sci-fi movies, the designer put together a collection of galactic and celestial looks, where intriguing feminine forms and bubble shapes combine to grasp his fantasy of ‘occasion dressing’ in space.

This season’s lineup orbits on the idea of glamour in an interstellar journey through the universe, culminating in a collection of heavenly gowns, stunning dresses and easy-to-wear separate with intriguing details that captured the magnificence of the celestial wonders, dazzling colours of nebulae formations and space rocket dynamics. The planets are also expressed in a retro voluminous balloon hemline –which can be seen on a variety of evening looks.

From lamé to futuristic two-toned taffeta and galaxy-like sequins, there’s an illuminating shine in this season’s fabrication and a colour palette that stretched through the galaxy’s cosmic shades from milky dusk to tangerine dawn and deepest, bluest midnight. Mirroring the theme is constellation-inspired beading and starburst motifs.

The Hero pieces are;

The KHOON HOOI collection is available at APW Bangsar, at selected boutiques/departmental stores worldwide, and on https://khoonhooi.com/collections

The label, KHOON HOOI has participated in Paris Trade Week since 2010, and his collection is stocked in exclusive boutiques around the world such as LesSuites in Paris, 51 East in Doha, Avanti in Riyadh and By Symphony in Dubai. 2.Oil up 3% on robust US fuel consumption, tight supply outlook

4.Robots to the rescue of restaurant industry