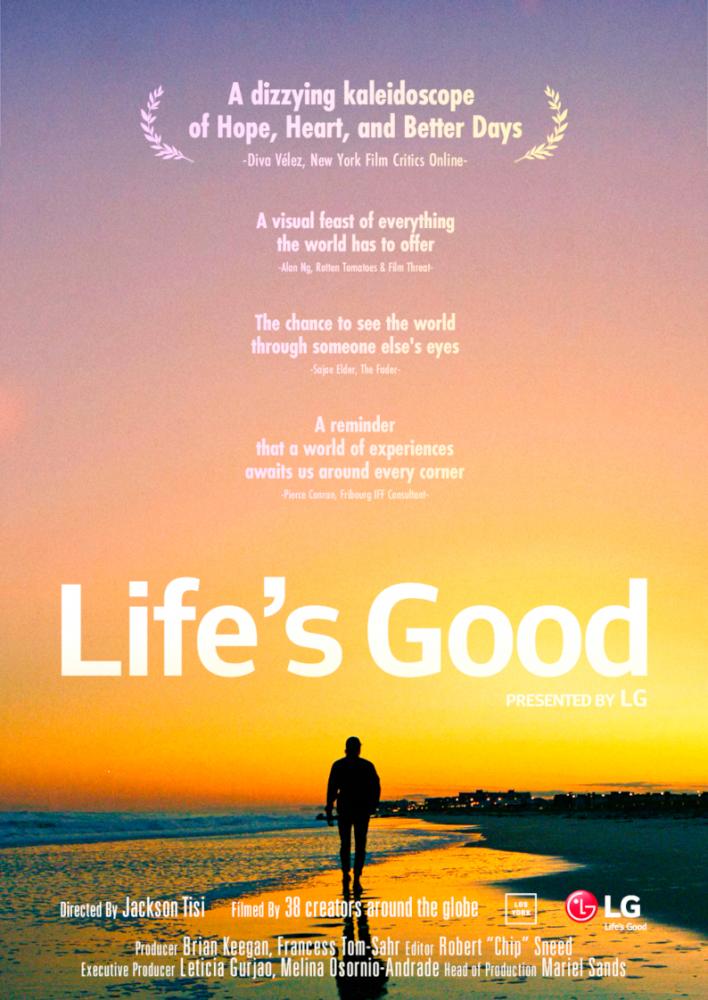 Woven together from videos submitted by hundreds of young filmmakers from around the world, the Tisi-produced work delivers a beautiful and touching meditation on life as interpreted by young creatives.

A key component of LG’s Life’s Good campaign which kicked off in May, the Life’s Good Film Project invited 531 young auteurs from 33 countries to share their creative submissions with Jackson.

“I wanted to share the emotions we all have and feel in life no matter what corner of the world we come from,” explained Tisi.

“Empathy is the key to communication with one another, especially when we’re getting through tough days.”

(25 years-old Jackson Tisi has made a name for himself as a young filmmaker. Jackson’s work spans music videos, commercials, and documentaries.

His film, LEON, won him gold at the Young Directors Award in Cannes, France last year. He was also admitted into the latest class of Young Guns by the One Club for Creativity. He is currently working on developing longer-form projects)

At previews earlier, this month, Tisi’s short was praised for its uplifting message and Tisi’s unique vision.

“An exploration through many eyes around the world, Life’s Good, is a truly singular experiment,” said Diva Vélez of New York Film Critics Online.

“The film demonstrates the beautiful differences of the human diaspora and our various environments, while also revealing how completely tied in soul and spirit we are and have further become due to the global COVID-19 pandemic,” added Vélez.

The 20-minute short explores different aspects of a good life in six chapters:

The first five chapters visualize a wide range of subject matter, from the beauty of nature, the vitality of the physical movement, personal growth nurtured in times of solitude to the togetherness and warmth of a close-knit community.

The final chapter depicts today’s young generation united in celebration of life, eloquently bringing the film to a close.

LG will screen the trailer of Life’s Good Film on LG’s digital billboards in Times Square in New York City and Piccadilly Circus in London beginning from, Aug 30. The short will make an appearance at select film festivals as well in the weeks ahead. The Life’s Good Film is now available for viewing on the LG Global YouTube channel. Additional information on LG’s 2021 Life’s Good campaign can be found here on Instagram.