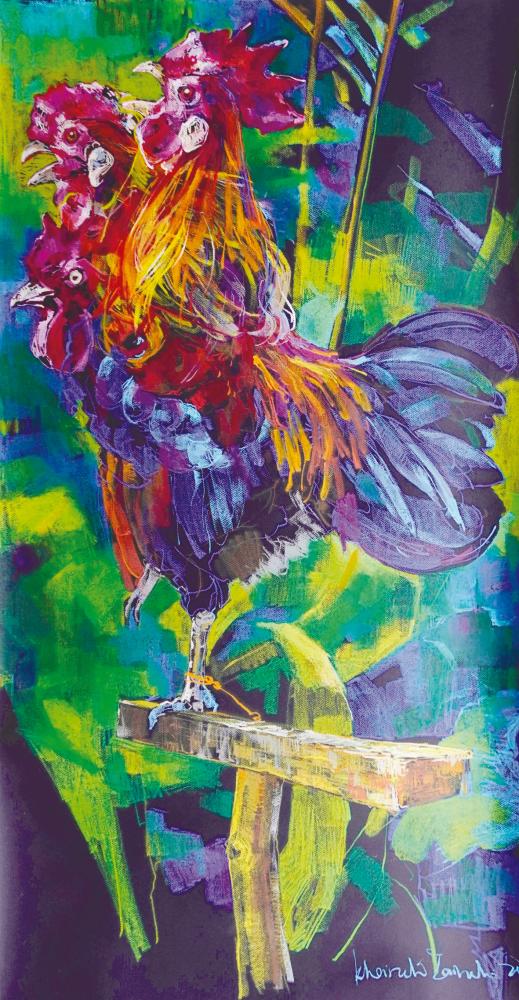 ARTIST Khairudin Zainudin searched for the soul of Kelantan inside himself.

In the process, he learnt to cherish the traditions and heritage of his native village culture.

The experience inspired him to express his observation artistically on canvas.

These are presented beautifully with intricate details and he masterfully combines colours and abstract in one frame.

“While I was growing up in the kampung, I did not feel nostalgic about this as I did not involve myself in any cultural or heritage activities. In fact, I turned ‘blind’ and ‘deaf’ towards such activities, as I had no interest to be a part of it.”

His attitude changed as he grew up and moved to Selangor.

“I had to go back and forth. I realised something was amiss. I felt empty and at the same time, I felt unsure of the emptiness that I felt.

“It took two to three years for me to understand. It hit me that I was a Kelantanese searching for the soul of Kelantan inside me. I had to dig deep and more holistically to understand my situation,” he said.

“However, I must say I have to delve deeper in future,” added Khairudin.

Looking back, he says he feels disappointed for not being a part of the cultural activities such as traditional games, plays and performances during his younger days.

Nevertheless, he does not blame anyone or the environment where he lived for missing out.

Eventually, Khairudin started focusing on highlighting subjects related to Kelantan as a way to pay homage to his home state. Recently, he drew a series of paintings titled “Ambivalence” and held a solo exhibition at the G13 Gallery in Petaling Jaya.

What is the main subject of your artworks?

Although, my main subject is figurative, I highlight the theme of indifference. Initially, the theme revolved around the movement, time and space of a subject. However, it has evolved to include a more complex issue. In our environment, we often face the issue of indifference.

The issue has no solution nor ending. Instead, it continuously stays on the radar without any final conclusion or full stop. I am very interested in sharing my experience with viewers without any particular stand or decision but instead, celebrate the paradoxical space.

In this fifth exhibition, I focus on real issues which take place in Kelantan, after observing and collecting information over five years and compressed into this solo exhibition.

In my artworks, I concentrate on drawing village figures from different districts of Kelantan.

It may be too local for some but this subject has to be brought back as a focus in the modern world.

I try to dig into subjects or matters which are considered outdated or lost in time to bring forward to the world of contemporary art. I try to present the importance of looking back at heritage and cultural elements in order that the values and ‘sifat kekitaan’ (spirit of togetherness) are not lost to fast-paced modernisation.

How do you come up with ideas?

My artworks have style and character and I maintain the style in all my works, which have linear perspective. The linear art form is the main element as I believe more in the unending lines. Starting from short to big, thin and later, the lines turn into a sort of a rhythm.

I use oil-based pastel colours and feel it has a unique quality and is not used by many artists.

How would you describe your art?

Every piece is a work-in-progress and it does not have an end-form as I believe my artwork can continuously evolve.

I am always working with lines and marks and doing hatching and cross-hatching, which are a part of techniques in linear drawings.

In a world full of uncertainty, I put my future in an unpredictable space. Even if one says we are in a good place or a better situation, this may vary to different people. Thus, I hope for a better future. 2.Ringgit extends downtrend vs US Dollar on stronger US economic data