Video game director Kesh Ganesparan explains what it is like to work on the intriguing Midwest 90: Rapid City 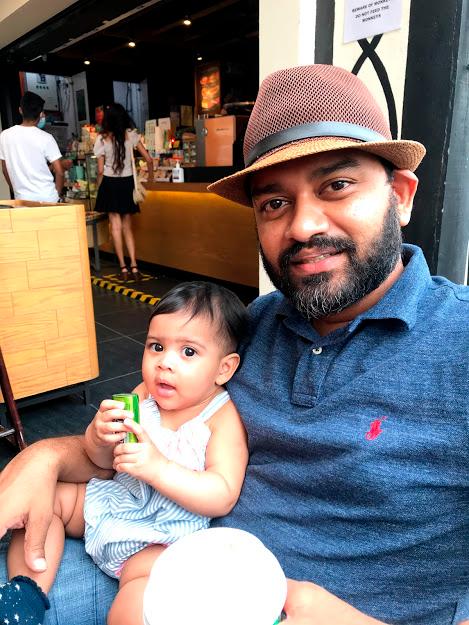 Kesh Ganesparan, pictured here with daughter Tinuviel, says he and his team have been hard at work on the game despite the challenges brought about by the pandemic. – Courtesy of Kesh Ganesparan

WHAT would you get if you combined the otherworldly creatures of Monster Hunter and the ingenuity of a contestant of MasterChef?

Probably Midwest 90: Rapid City, an upcoming video game that is set to deliver a new spin on the restaurant game genre. And best of all, it’s being crafted entirely in Malaysia.

The game, also known as M90, is in the works by local indie game outfit Hidden Chest Studio, and is set in Rapid City, South Dakota, in an alternate future where the United States is going through a second Great Depression.

You play the owner of a restaurant under siege by monsters, and who later sells mouth-watering Midwestern dishes made from monster meat.

Game director Kesh Ganesparan conceived the idea for the game while he was dining in Betty’s Midwestern Kitchen, a real-life establishment in Petaling Jaya. Inspired, he took the bold step of quitting his job and assembling a team to help create the game.

As a self-described fan of both tycoon and combat games, Kesh was eager to marry both genres into his dream game.

“It's this hybrid of management and combat that inspired me to make M90,” he explained.

“But I also wanted to make the game feel smaller and more intimate, and spin a good yarn. I’m also a Malaysian who enjoys good food. So, running a restaurant in a small town under siege by monsters just ticked off all the boxes.

“After several months, I finally met our project manager Alexander Tan through a referral from a friend. Alex then introduced me to Tan Yi Ming, our lead programmer. I pitched the game concept to them with an early prototype and Alex and Yi Ming found the idea sound enough to get on board.

“That was towards the end of 2019, and we have been working on the game ever since.”

Last year, they managed to secure a grant from the Malaysia Digital Economy Corporation (MDEC) to continue developing the game.

“Fast forward to now, we have more passionate people on the team working on M90, and we hope to find more like-minded people to be part of the project.”

As the company was formed during the pandemic, their work schedule is a little different from most other game studios.

“We decided to forgo having a physical studio to work in until the whole thing blows over. Therefore, our ‘studio’ is in our homes.

“For me personally, a typical workday starts every morning when I’m reluctantly woken up by my daughter and my wife leaves for work. Then, it's usually working with the team online over Discord throughout the day.

“From discussions on the story with the narrative team, to review sessions with artists, clarifying mechanics to Yi Ming’s team and progress meetings with Alex, it’s all done online ... with a high chance of interruption from family members at home.

“Nonetheless, the experience has been positive and we have made good progress with M90.”

The game is slowly beginning to get noticed internationally, and was even featured in a segment by South Dakota-based TV station KEVN.

“We are still early in development and people are only just starting to take notice of M90. We are still just a small blip on the radar of this US$152 billion (RM627 billion) industry. But for those who have taken notice of M90, the reception has been good.”

The game is reportedly on-course for an early access debut by the end of October this year.

“Early access isn't the final milestone that we have to hit, but it is an important one because we don't need the game to be 100% completed by then, we just need it to be fun.

“However, with the MDEC grant completely channelled into development for the early access build, we are putting a lot of effort into looking for a publisher to further support our development moving forward.”

Asked if he had any words of advice for other budding game developers, Kesh replied: “If you want to be a game developer here in Malaysia, you have to prepare yourself for a big challenge.

“Finding financial support is not easy here, so it’s best to start with a small project rather than a AAA level game which costs millions of ringgit.

“The most important thing is that you have a team you can count on to make significant progress and the right network of people who can give you relevant feedback throughout your development.

“Last but not least, keep growing as a person. My past is littered with failed ventures into video game development, but I learned and grew with each attempt. So don't give up, and keep growing.”