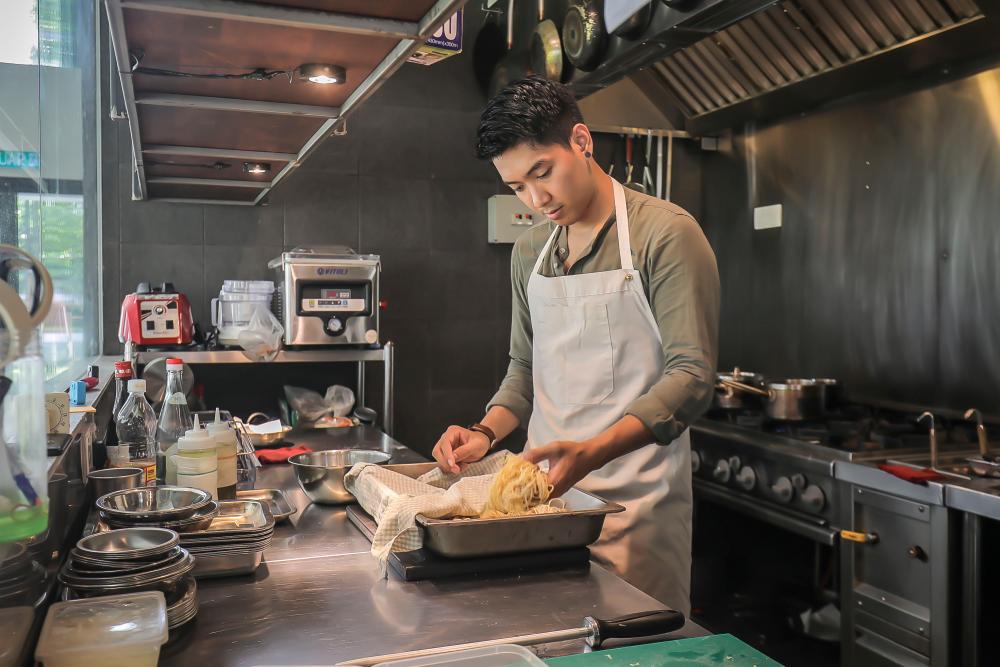 IN 2013, Daniel Yap made his childhood dream of living in Italy a reality, spending a year in Piedmont, a region in the country bordered by France and Switzerland, where he fell in love with the local cuisine.

There in the northern region for a pairing course that taught Italian culinary culture and history, he returned and ran Pop Up Dining KL with former KDU classmate, and now restaurant partner Miki Lie.

The experience served as a platform for the duo’s next project – Gooddam, an Italian restaurant largely inspired by the head chef’s food affairs in Piedmont.

According to the 25-year-old who says his culinary muse is “the world”, the generous use of butter in Piedmont fare share characteristics with French cuisine, unlike typical associations with “a lot of olive oil or tomatoes.”

“It’s kind of different compared to what we know about Italian cuisine in Malaysia. That’s why I started this northern Italian-inspired restaurant.

What flavours do you personally like to play with?

“I’m more into the sweet stuff. So even [in]my savoury items, you can find something sweet. For example, I had a pork shoulder dish, [where I used] gula Melaka.

“It’s a very local ingredient but I turned it into something like a glaze with some spice, so that even Italians will enjoy it.

As a head chef, what are some of the things that depend on you in the kitchen?

“It’s one of the difficulties that I faced when I opened this restaurant because this is my first restaurant, my first position [handling] such a big team.

“In the kitchen, there’s a total of eight, including me. In this restaurant, there are more cooks compared to the front of house, because we will serve out the food as well.

“This is a very open style kitchen ... where we will do all the plating and the guests can see everything. We will send out the food. We’l explain the dishes, so it’ more interactive, not just the old traditional kind of kitchen.”

“When we come up with a menu, it will be based on inspiration that we find. So [it doesn’t just involve] myself. I’ll involve the whole team, cause the team is very young here. [The] average age is 22. We’ll all come up with ideas together for the menu.

What is your signature dish here and how did it end up on the menu?

“It’s a dish called tajarin. It’s a type of pasta made only from egg yolk, so it’s a very rich pasta. It’s very [simply] cooked in butter and guanciale, and then toasted hazelnuts.

“Guanciale is the pork cheek part. In Italy, we use cured pork [and] here in the restaurant, we actually do our own. We cure it ourselves and smoke it ourselves.

“This kind of pasta is usually very dry, and so far none of the restaurants are selling it in KL. Basically, we want to educate guests that [there’s more than just] spaghetti.

“Then, to make this pasta is kind of hard, even though it’s very simple. It tastes very Italian for me but for some Malaysians, it tastes like Hakka mee. So it’s kind of like a win-win situation.”

What is something you would do if you had more than 24 hours in a day?

“I would just cook at home and spend time with my family because my family, they don’t know how to cook. So I have to go back and cook for them, prepare a nicer meal for them.”

What is something you think everybody should do at least once in their lives?

“That’s what I learnt, because for myself, if you asked me to work in the kitchen for 365 days, I cannot [do it]. I won’t have inspiration at all. I won’t work properly for you.

“So I need a long break. I need some break. Even my partner as well, that’s why we can work together.”