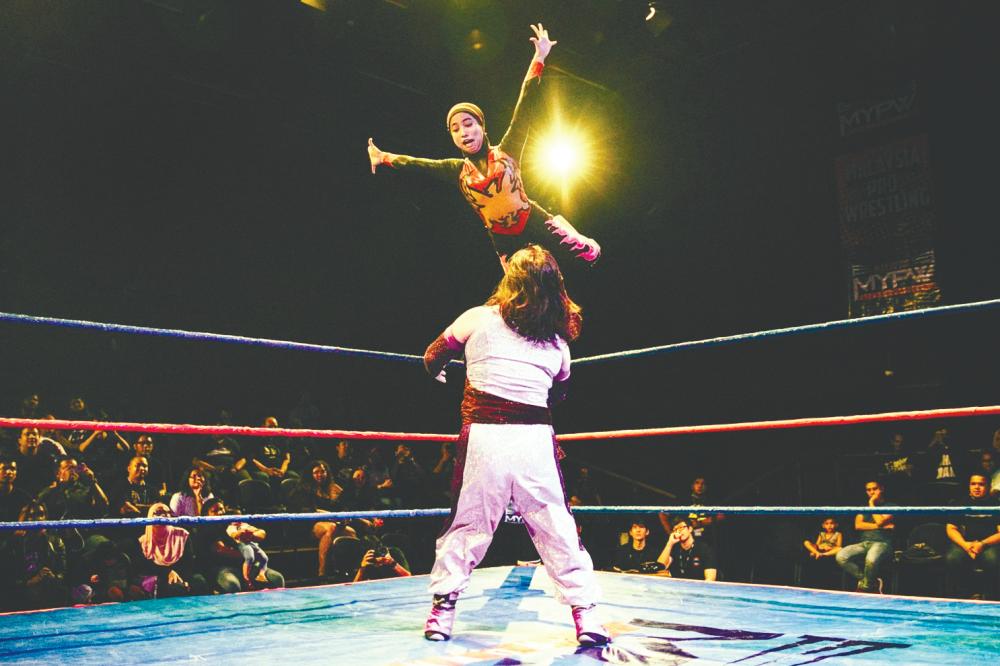 Phoenix takes flight during one of her pro matches. - Calvin Alexi

FEW MALAYSIANS – and even local wrestling fans – realise that we have our own Malaysia Pro Wrestling (MYPW) school and promotion that consists of a handful of talented and charismatic individuals.

Fewer still would know that Nor ‘Phoenix’ Diana is the first hijabi pro wrestler in Malaysia, and possibly the world. In fact, this petite 19-year-old has been tumbling in the ring for three years.

Once a masked wrestler, Nor Diana was unmasked at the end of last year at MYPW Wrestlenation, the most prominent local pro wrestling event in 2018. Recently, at MYPW Redemption, she wrestled the talented Emi Sakura from Japan.

How did you get into wrestling?

“It all started when I was 14. I played a lot of wrestling video games with my younger brother. From there I started watching wrestling TV shows, and I was hooked.

“At 15 I saw my first live WWE live event in KL at a convention. I then began looking online for wrestling and found MYPW which was known as Persatuan Gusti Malaysia back then. I immediately decided to join them, to train with them, and follow my dream to become a pro wrestler.

How did MYPW treat you?

“Everyone at MYPW was very welcoming. I was not treated differently just because I’m a girl, or because I was wearing a hijab. I am one of two female wrestlers at MYPW, and we train with the boys.

“Our coach is Ayez Shaukat Fonseka. He is virtually the trainer for all the favourite wrestling stars in Malaysia.

“Because they don’t treat me differently, I get to do the moves that I want to do, turn down moves that I can’t do, and I was encouraged to perform moves that I have no confidence in. It is an excellent experience.”

How did you become Phoenix?

“That is quite a story.

“After just two months of training, I had to replace a wrestler at an event. I was so surprised because I had only just learned how to take a bump properly. I had not developed a persona at that time. I didn’t even have an outfit.

“So I went to a bundle shop, got pants and a leather vest top to go with my undersuit. But I still didn’t have an in-ring persona ... and that’s when my coach said I should go with Phoenix. That’s also when he gave me a luchador mask to wear.”

How was the reaction towards you?

“Not only I was an unexpected sight since I am relatively smaller than other wrestlers, but some didn’t even know if I was a boy or a girl ... because of the mask and because I was fully covered, unlike conventional female wrestling gear that tend to be revealing. Honestly, I prefer wrestling without a mask.

“My family, even my fellow wrestlers, were shocked at my persona in the ring.

“You see, I am usually a quiet person. I’m not that outgoing or outspoken. But I love wrestling. Being in the wrestling ring just brings out the other side of me that no one has seen before.”

What was the reaction after you unmasked?

“I always wanted to wrestle while not wearing a mask, but I was also afraid of what people would think about a girl wearing a hijab wrestling. [However, it] was a move that I supported.

“Actually, it came as a surprise. They told me a month before [the event] that I was to be unmasked. I didn’t expect it to be so soon and I didn’t even say to the promotion that I wanted this.

“My first wrestling match after being unmasked was in Singapore, at an SPW: Ladies Night (Singapore Wrestling) event. When the name Phoenix was announced, some folks were surprised that I was unmasked, and that I was a hijab-wearing girl. I surprised a lot of people that day, and I have not worn a mask to wrestle since.”

What would you say to other girls who aspire to become a wrestler like you?

“Please join us. There are very few female pro wrestlers in Asia, especially in Malaysia. Don’t worry, the folks at MYPW are all good folks.